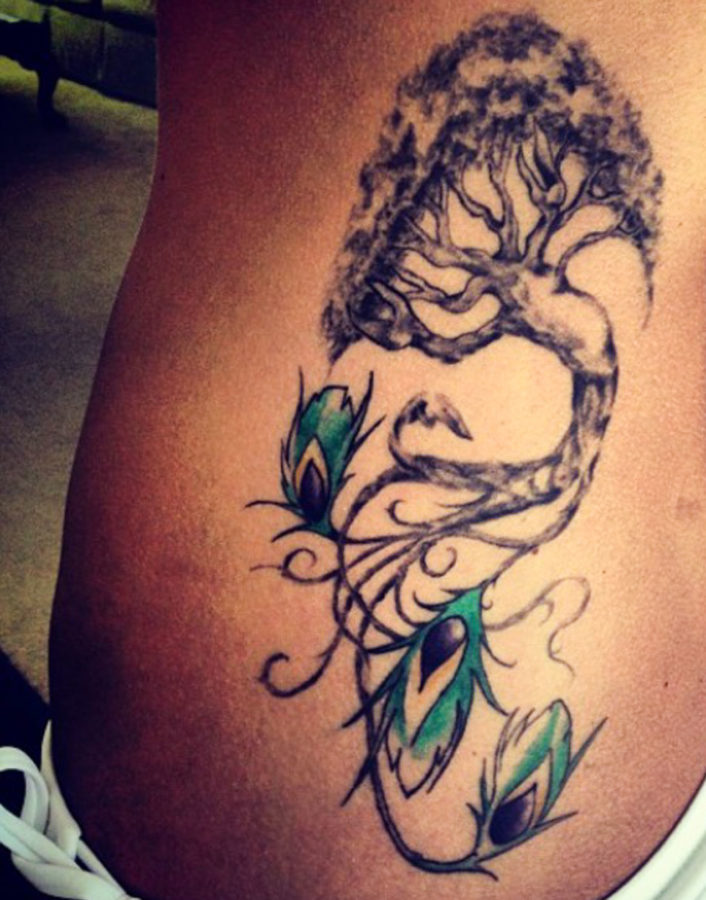 I am an OU senior, graduating this April. I am an editor for the Oakland Post. I have a 3.8 GPA, have been on the dean’s list the past two years and have held two internships in the “real world.”

I also have tattoos. Nine total.

If we were taking the SAT a few years ago, it wouldn’t be hard to pick which of the above statements doesn’t fit with the rest.

But the tattoo taboo is changing.

According to a USA Today article, around 40 percent of Millennials (that’s us – Generation Y) have a tattoo.

The more tattooed people, the more businesses and people are accepting of that permanent ink. But, it’s not always the case.

I work at Trader Joe’s, a grocery store chain that was founded in California in the late 1970s.

Until recently, most of my tattoos (except the one on my inner wrist and back of my neck) were covered up at work.

A few months ago, I began work on a half-sleeve on my right arm. The tattoo depicts a detailed Yoda surrounded by space-y looking flowers and is quite obvious unless I am wearing a long-sleeve shirt.

I can have my tattoos showing at work, and most of the time, I do. However, in the cold winter months, I usually have them covered up.

Depending on the length of my shirt’s sleeves, I can definitely tell a difference in how people respond to me. In my experience – the reaction depends on age.

Most of my peers either don’t say anything or gush over my tattoos, asking me where I got them and complimenting the art.

Any time I’ve received a negative comment, it has been from someone over 40.

Comments range from the innocent, “But doesn’t it hurt?” to “Why would you do something like that?”

If I only did things now that I would do as an 80-year-old, I would lead a much different life. I don’t see that as an intelligent or useful way to live.

I want tattoos now, and if I don’t like them when I’m 80 – who cares? I’ll have wrinkles and 60 years of good memories with my ink.

Ink in the workplace

Carol Ketelsen, OU career consultant for career services, said the topic of tattoos is not one they discuss much.

“We tell students to cover up all visible tattoos until they know the company policy and culture,” Ketelsen said. “Every company has its own policy on tattoos, but for all companies, the tattoos should be covered until you learn the policy.”

According to an article from USA Today, “31 percent of human resource managers said visible tattoos could have a negative impact on their decision whether to hire someone, but bad breath weighed even heavier in the survey.”

Being a journalism major, I am a behind-the-scenes sort of person and tend to work around open-minded, artsy folk.

I could mostly cover up my tattoos if I had to, but I’m not sure that I would want to work/fit in in an environment that stifled personal expression. I know myself, and I’m not worried about my tattoos hindering my career options.

However, every workplace is different – something to consider before getting inked.

OU sophomore, Allisondra Gutschow, a health science major currently working as a certified nurse aide, has to cover up her tattoos.

“The employers don’t want anyone to be offended and want us to look professional,” Gutschow said.

She is not worried about future career opportunities because her tattoos – an Icelandic symbol, a cross and a Bible verse – are easy to cover up. However, she said that if she had visible tattoos, she would most likely not be hired anywhere within the health field.

Whatever your opinion of tattoos may be, remember they are a personal choice. Tattoos no more define a person than his or her hair color.

It is also a permanent choice. If you want a tattoo, get one! But make sure you are okay with having it on your body for the rest of your life.