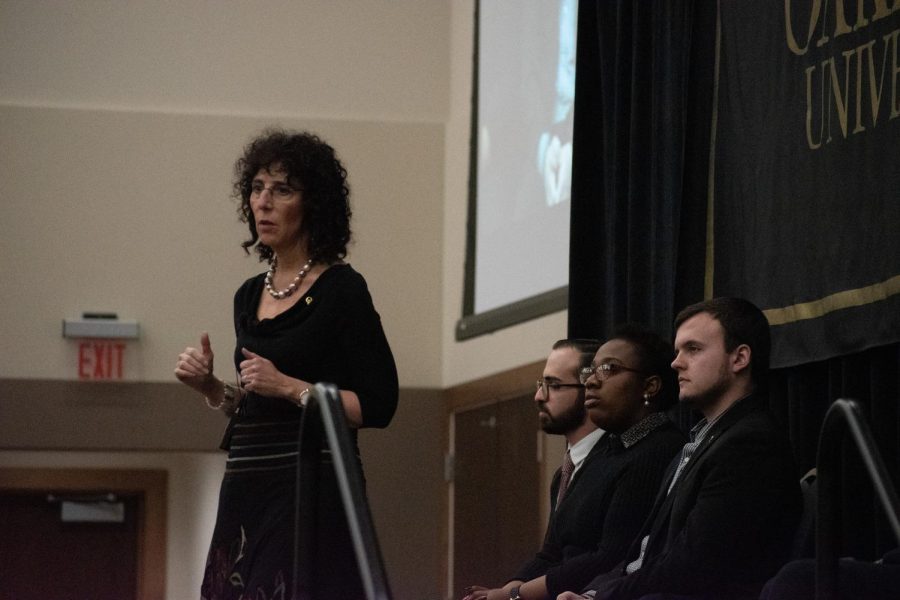 President Ora Hirsch Pescovitz leads an appeal to increase state funding from $3,000 to $4,500 per student.

President Ora Hirsch Pescovitz led an appeal to the Michigan legislature to increase the base-level funding per student budgeted each year on Wednesday, Feb. 19 in the Oakland Center.

With opening remarks given by Vice President for Student Affairs and Chief Diversity Officer Glenn McIntosh, the event was directed at the state government and involved members from across the Oakland University community. The name “Strive for 45” comes from the request to increase the state funding OU receives from $3,000 to $4,500 per student.

“For years, the state’s funding model hasn’t changed in response to the change in the higher education environment — the landscape has changed tremendously,” McIntosh said. “We believe that model is broken.”

OU receives the lowest amount of money from the state compared to other universities, according to Pescovitz. Even increasing the floor funding to $4,500 will not allow OU to meet the funding-per-student average of $5,000 among the state’s 15 public universities.

Among all other public universities, OU has had the most consistent positive enrollment rate, but despite the rapid growth of the university, the funding received has remained stagnant for two decades.

“Over the years, the funding discrepancies have been growing worse and worse, making the annual state funding allocation more and more unfair,” Pescovitz said. “Our campaign, ‘Strive for 45,’ sends a clarion call for legislatures, the governor and Michigan business, civic and philosophic leadership.”

Three students of different backgrounds shared their financial experience and gave a personal perspective on how the lack of funding has directly affected them.

“Every summer brings the frustrating conversation topic of how much my family must save in order to send me to school and still stay above water with bills and other financial responsibilities,” Student Body President Destinee Rule said. “I consider myself a momma’s girl, but the most difficult conversation about the cost of college always puts a strain on our relationship, and it shouldn’t be that way.”

The choice of $4,500 comes from the 1999 floor budget of the same amount per student that was then decreased in 2000 and never raised. According to Pescovitz, if the 1999 model had been adjusted only for inflation, present-day OU students would receive nearly $7,000.

Pescovitz also pointed out the culture of the professional world has changed, and now, students are required to further their education in order to compete in the workforce.

“The state’s disinvestment in higher education comes at a time when there’s a growing need for bachelor’s and graduate degrees,” she said. “In fact, 36 of the hottest jobs that our students are going to go out and try to get in Michigan require at least a four-year degree. Graduates from Oakland … are all contributing to building the Michigan economy.”

The “Strive for 45” event placed emphasis value of higher education to not only the students that are receiving it, but to the entire state culturally, economically and civically, and how the state’s budget should reflect those values.

“Michiganders believe ardently that education is a core value, and as a part of Michigan’s cultural and economic transformation, education is a principle that stands on the pillars of reason, fairness, diversity, the pursuit of knowledge and upon the notion that process should and must benefit all of us,” Pescovitz said. “Among the state’s highest priorities must be a public investment in the students we have that create better prospects for all residents … and that investment must be in higher education.”