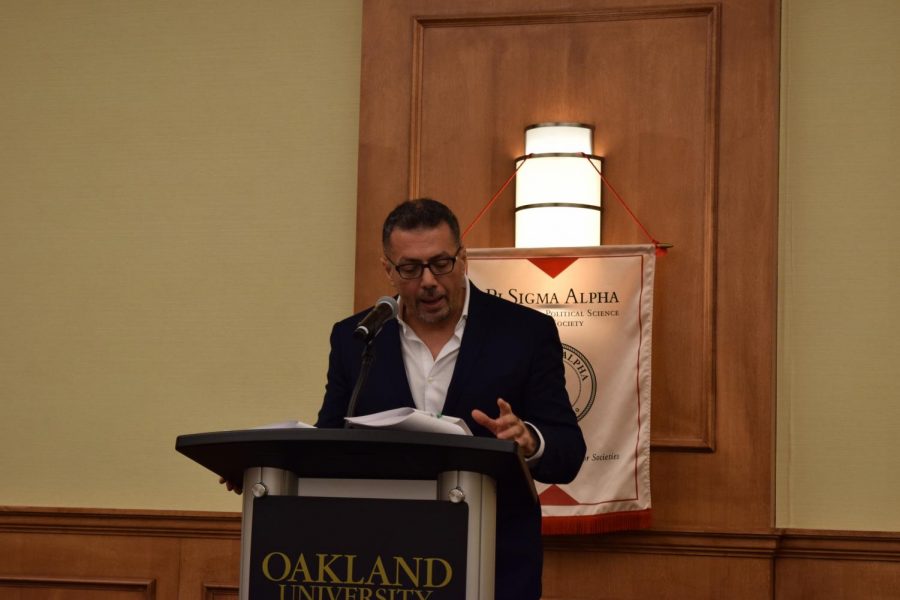 Author and journalist Ramzy Baroud discusses Palestinian identity during his lecture on Tuesday, Feb. 18 in the Oakland Center.

Author, journalist and media consultant Ramzy Baroud gave a lecture at Oakland University on Tuesday, Feb. 18. Hosted by the political science honor society Pi Sigma Alpha, Baroud discussed Palestinian identity and how Palestinians can reclaim their cultural narrative to a crowd in the Oakland Center.

“I am a Palestinian refugee,” Baroud said. “I am a refugee in the sense that I come from a family that was ethnically cleansed from this history of Palestine in 1948.”

The 1948 ethnic cleansing Baroud is referring to is the Nakba — the 700,000 Palestinian Arabs that fled or were forcibly removed from their homes at the end of the 1947-48 Arab-Israeli War. Since then, Israel has passed laws that prevent Palestinian families from returning and reclaiming their old homes.

According to Baroud, being a refugee is a critical part of Palestinian identity.

“We insist on our refugee status in the sense that if we let go of this refugee status, if someone redefines this refugee status for us, then we redefine this entire so-called conflict altogether,” Baroud said. “It is important for us that you know our struggle for freedom and rights and justice with Israel does not go back to 1967 … but it actually goes two decades earlier than that to 1947-48 when the Palestinian people were ethnically cleansed … We fear that the moment we relinquish the title of being refugees, then the issues that have defined our struggle from the very beginning would be marginalized as well.”

To properly tell the story of Palestinian people, one voice would not be enough. Baroud turned to Palestinians and got them to tell their stories. These stories of formed the basis for his 2018 book “The Last Earth: A Palestinian Story” and his new book “These Chains Will Be Broken: Palestinian Stories of Struggle and Defiance in Israeli Prisons.”

After Baroud’s lecture, the microphone was turned to the crowd for questions. Omar Wajeeh, a student of Palestinian descent, used the moment to share his grandfather’s story.

“When he got older, around my age, the Israeli military came to his door and said, ‘You have to join the military,’” Wajeeh said. “He refused because he knew that he would have to fight with Israelis in butchering his own people. He was labeled as a terrorist and had to flee the country.”

Wajeeh continued into expressing dissatisfaction with the two major Palestinian justice movements (a movement focused on words and diplomacy and a movement focused on militant action) and wanted to know which school of thought should be pursued. Baroud responded by saying he believes an organic, people-driven and democratic resistance is the best form of resistance, calling back to the South African anti-apartheid struggle.

“The anti-apartheid movement was perhaps the most successful global solidarity model anywhere in the world,” Baroud said. “We are trying to duplicate it now with the Boycott, Divestment, Sanctions (BDS) movement in Palestine and around the world.”