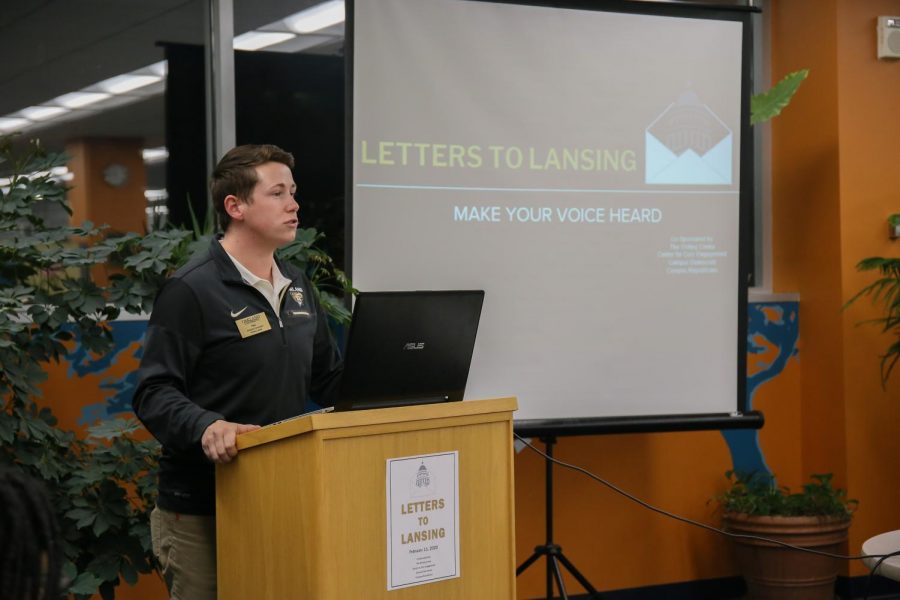 The Writing Center hosts a workshop on addressing letters to local representatives on Tuesday, Feb. 11.

Students assembled at Kresge Library on Tuesday, Feb. 11, to celebrate civic engagement with their local representatives.

The Oakland University Writing Center teamed up with the College Republicans of OU, the College Democrats of OU, and the OU Center for Civic Engagement to hold a bipartisan workshop on how to address letters to local representatives. House Republican Andrea Schroeder of the 43rd District and House Democrat Rosemary Bayer of the 12th District spoke alongside writing center consultants Red Douglas and Rachael Baker.

Dr. David Dulio, director of the Center for Civic Engagement, started the night with a word about the importance of this event in regard to civic duty.

“One of the goals for the [Center for Civic Engagement] is to make Oakland University a convener of conversation about issues of public importance, but to do it in the right way,” Dulio said, “in a civil manner, a respectful manner, a deliberative manner that can be productive, and what you’ll hear about tonight is the productive part.”

He spoke about the unique opportunity being provided — the spokespeople — after giving students a presentation not only about how to write and address mail to government officials, but also a crash course on how local government operates.

“You have the opportunity to write letters, and I would even broaden it to communicate with elected officials. It’s their job to listen to you,” Dulio said. “You are their constituents. They work for you. If you can get your point across to them in an effective manner — which is what tonight is all about — that’s a really great thing, not only for you and what you think is important, but for democracy broadly.”

Douglas introduced the goals for the night and what the writing center hoped to provide everyone attending, from better government understanding to the proper etiquette when addressing a government official.

“Our objectives with this brief presentation are to discover who represents you or at least teach you how to figure that information out yourself, discover where to send your letter, discover proper formatting and language … and then, really basic, how to address your letter,” Douglas said. “You wouldn’t believe how many people actually don’t know how to do that.”

After Douglas and Baker briefed the audience on how to find their local representatives and write to them, representatives Schroeder and Bayer offered their perspectives on why a bipartisan event like the “Letters to Lansing” is so important.

“I take every opportunity I can to speak, especially to young people, about engagement and being a part of the government, and just being active,” Schroeder said. “When I was in high school and in college, I wasn’t active and engaged, and I never had aspirations to be a politician or an elected official, but I have learned and have really encouraged my kids … to remain engaged on what’s happening.”

The writing center hopes to organize similar events twice a year to celebrate civic engagement and bipartisanship on campus, as they were pleased with the outcome of the first event. Dr. Sherry Wynn Perdue, director of the writing center, plans to continue hosting bipartisan, writing-based events like “Letters to Lansing.”

“I’m really excited at the level of engagement that we observed, but for me the best part was the way that our two guests interacted with each other and demonstrated true governance in action against what we see on the national stage, I thought that was important,” Wynn Perdue said. “I just got done talking with Dr. Dulio, and we’re going to do this every semester. We’re hoping to grow it to the point where this space won’t contain it and we’ll have to find a bigger space for it.”