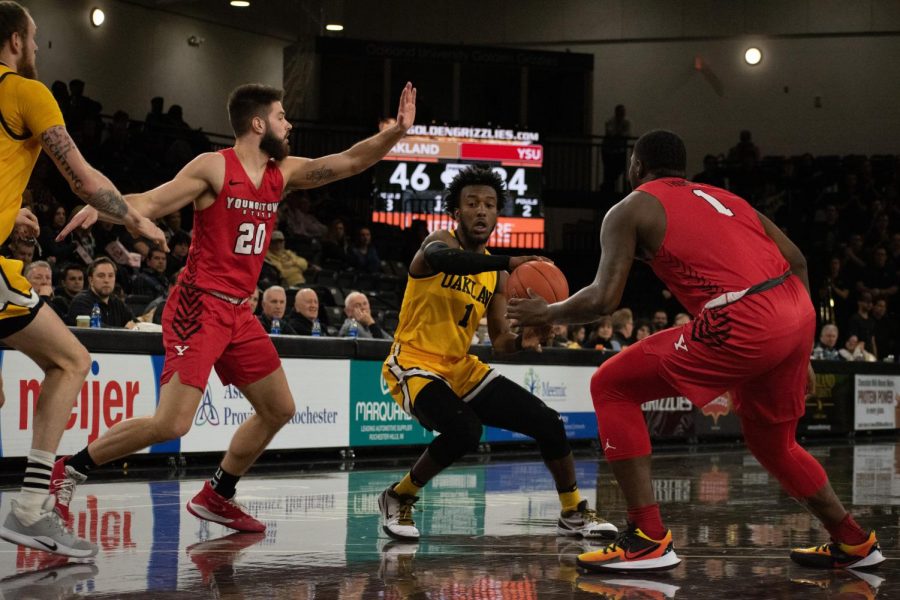 Men’s basketball claims a 72-64 victory over the Youngstown State Penguins on Saturday, Feb. 15 in the O’rena.

The Youngstown State Penguins and the Oakland University Golden Grizzlies have history.

Every Golden Grizzlies fan knows the way the 2017 Horizon League Tournament ended for Oakland, on a last second layup from Jorden Kaufman.

In Youngstown on Jan. 9, the Penguins once again beat the Golden Grizzlies on a last-second layup by Darius Quisenberry, winning 61-60.

The main difference between the Jan. 9 game and the game on Saturday, Feb. 15 was the guard play of Tray Maddox and Rashad Williams. Williams was still inactive in the previous match-up. In his first eight games with Oakland, Williams took the scoring lead away from Xavier Hill-Mais, scoring 21.4 points per game. Williams made his impact early on, hitting a deep 3-pointer and flexing to the crowd.

Lions cornerback Darius Slay was in attendance, sitting court side. The Pro Bowl defender was looking to attend either an Oakland or University of Detroit Mercy game on Thursday, Feb. 13, but ended up attending the Saturday game instead.

Kevin Kangu came off the bench, but added 13 points in 27 minutes. Kangu hit three 3-point shots, something he hadn’t done the entire season. Kangu’s 14 points were the most he has scored in a conference game.

“He [Kangu] went in early and against the press he did something really stupid, and I got mad and yanked him,” Head Coach Greg Kampe said. “Two minutes later I put him back in and for some reason … he was really good the rest of the game. All the pressure he put on himself went away. Kevin Kangu is one of the nicest kids I’ve ever had on my team, he’s a very hard worker. To see success like that made everybody happy.”

Oakland’s defense provided them with an early lead. The Penguins were 5-19 through the first 12 minutes, scoring 13 points. The Golden Grizzlies were slightly better, shooting 8-20 (40%). At the eight minute media timeout, the Golden Grizzlies led 20-13. After the 16-minute mark, Oakland went on a 15-2 run.

After Youngstown tied the game at 22, Oakland was able to pull ahead and take the halftime lead, 31-24. Maddox led the Golden Grizzlies with 10 points and Williams had eight.

Williams continued his scoring in the second half, hitting two 3-pointers. Oakland stretched their lead to 12 points after eight minutes, with Maddox and Williams providing most of the offense. The Golden Grizzlies hit three consecutive shots, while the Penguins were without a point in three minutes.

Oakland was able to maintain a double-digit lead throughout the remainder of the second half after leading by at most 18. Eleven Golden Grizzlies saw action, with four finishing in double figures. Hill-Mais led the team in scoring with 20 points, recorded a double-double with 11 rebounds and added three blocks.

Hill-Mais struggled to get his offensive game going in the first half, but in the second he got his shots to fall.

“In these type of games if you can just keep going no matter what happens to you, nine times out of 10 good stuff happens,” Hill-Mais said. “Lucky for us, we had more good stuff happen than bad. My teammates picked me up when I was struggling early on and had my back.”

The next game for the men’s basketball team is at the O’rena against the Milwaukee Panthers on Thursday, Feb. 20 at 7 p.m.