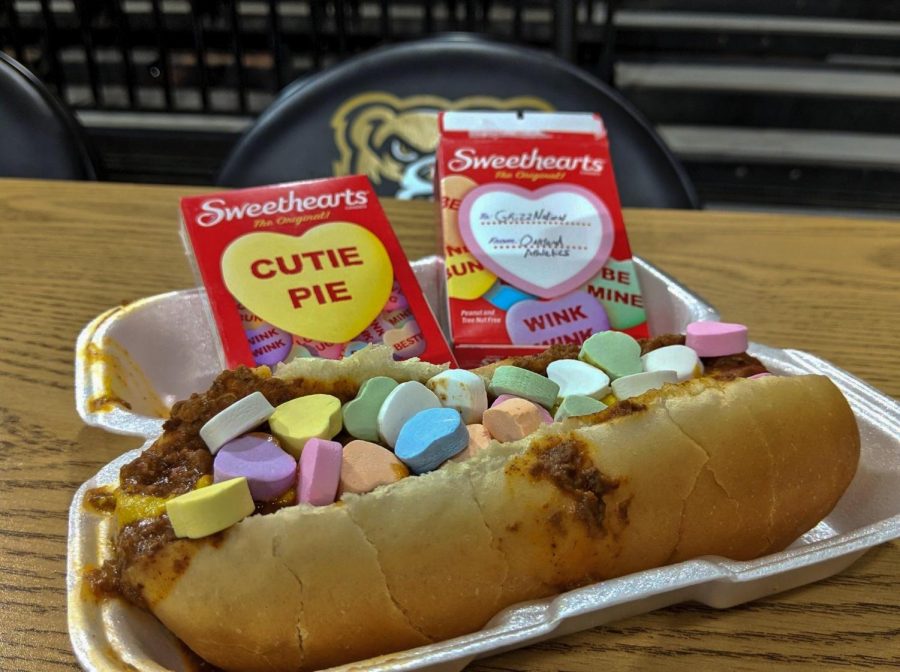 The “Sweetheart Dog” was available at the O’rena over Valentine’s Day weekend.

Candy hearts on top of a chili dog … understandably never done before. Over Valentine’s Day weekend, the Oakland University Golden Grizzlies put on a promo called the “Sweetheart Dog,” with Sweetheart candies on top of a National Coney Island coney dog.

Luckily for all of you who missed this program, I, as the faithful sports editor of The Oakland Post, tried this dog. On Saturday, Feb. 15, a day removed from Valentine’s Day, I embarked on a journey to the O’rena to try the infamous sweetheart dog, which caught the attention of national media personality Darren Rovell on Twitter.

I ate nothing but yogurt the morning before the Sweetheart Dog. I wanted to free room in case I absolutely loved it and wanted eight more. As I walked to the concession stand in the far corner, I was overcome by a sense of excitement, fear and gastrointestinal worry. I asked the man working if he had them, and he obliged. After paying a modest $4.50, I was in possession of quite possibly the weirdest combination known to man.

I walked back to my seat on press row with my coney and cup of Sweethearts. It was time. I carefully placed the candy on top and put out a Snapchat story to all my friends to show them just how mad I’d gone. Now, it was time to eat.

My first impression was: messy. The Sweetheart Dog has a lot going on. Hot dog, bun, candy, chili, onions and mustard. It is enough to put someone in the intensive care unit. Luckily, I have trained my body with years of Taco Bell, so I was able to hold up to the test.

What it lacks in cleanliness, the Sweetheart Dog makes up for in variety of flavor and texture. I’ll give it that — it does not lack different flavors and textures. The dog goes from sweet to sour and from soft to rock hard in seconds.

Before trying the dog I sat down with John Ciszewski, associate athletic director for external operations in the athletics department, to find out the origins behind this sweet and salty creation.

“We want people to come to our games and say, ‘It was a good time — win or lose, it was a good time,’” Ciszewski said. “The candy on the hot dog was probably my idea, but John our SID (Sports Information Director) and Maria [Rivera, senior assistant athletic director] came up with the name.”

Athletics heavily promoted the Sweetheart Dog, creating multiple commercials which debuted on their social media accounts, prompting reactions like “destroy it” and “this is vomitous.”

“Kampe did his Guy Fieri impersonation, so we tweeted it out to him to try and get some national exposure,” Ciszewski said. “We’re just trying to get some attention to our basketball teams. We then turned it into a ticket package as well — for $10, you get a ticket to the game and a Sweetheart Dog.”

While the dog does look a little abnormal, I believe that “vomitous” is too dramatic. The Sweetheart Dog is unique, not bad. On a 1-10 scale, I give it a six. While it is not an air ball, I would characterize it as a nice mid-range step-back jump shot that just rimmed out. Very creative, but very disturbing at the same time.