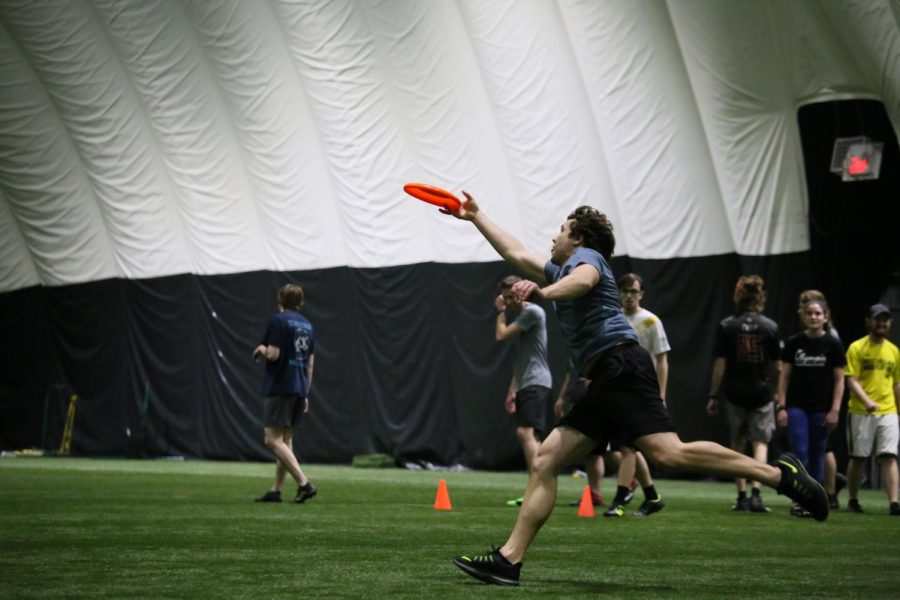 An Oakland Outlaw runs to catch the frisbee at a weekly practice on campus.

The Ultimate Frisbee team members are running more than 500 miles this month.

The Oakland Outlaws are hosting a run-a-thon throughout February to raise money to go to future tournaments. The current 32 members will be running one mile for every $2 donated to the group’s GoFundMe page — and they have until Saturday, Feb. 29 to run every mile.

Team Fundraising Coordinator Meredith Stern came up with the idea when brainstorming ways the Outlaws could raise money for tournament fees and increase awareness for the group.

As of Monday, Feb. 10, supporters have donated almost $1,200 to the Outlaws, meaning the members will be running around 600 miles — something they didn’t anticipate when creating the fundraiser and setting its $1,000 goal.

According to Jacob Lekki, Oakland Outlaws president, the team will use the money for the upcoming USA Ultimate (USAU) tournament, which is the college-level competition Lekki described as the “NCAA of Ultimate Frisbee.” The team already qualified for sectionals in Brighton on April 18-19 and will use the funds toward tournament fees and other expenses.

Lekki said the team is trying to open the sport for more people. The Outlaws aim to grow as a team and help heighten OU as a university.

“When we join the team, we don’t join just for ourselves,” Lekki said. “We’re kind of a group of people that didn’t get into other sports or make other teams, so we’re really open to that. We want to work together to make our sport inclusive for all people … and we want to just keep growing that community.”

The frisbee team also does community engagements, such as its breast cancer fundraiser in October. The Outlaws are working on having T-shirts available next year and will be selling fan apparel in March.

The team also works with Dakota Highschool in Macomb to help support their Ultimate Frisbee family.

“OU community members should donate to us because the more funding we get, the more we can spread awareness about the team and build it up,” Stern said via email. “We want to provide an Ultimate Frisbee community. We would be able to fund more tournaments and pay for hotels for those tournaments.”

Lekki said running 100+ miles a week as a team will help the players prepare for future tournaments.

“It really helps us out because not only are we receiving donations — and we’re so thankful for all of that — but we’re also getting in shape and conditioned for our season,” he said.

The Oakland Outlaws’ GoFundMe page will be open for donations until mid-February to allocate time for the team to accept late donations and run last-minute miles. Donors can contribute to the team’s total or ask for a specific player to run by noting it in the donation message.

All miles run will be tracked on a spreadsheet for authenticity.

To keep up with the Oakland Outlaws Ultimate Frisbee team, visit the team’s Instagram @ououtlaws and Facebook page.