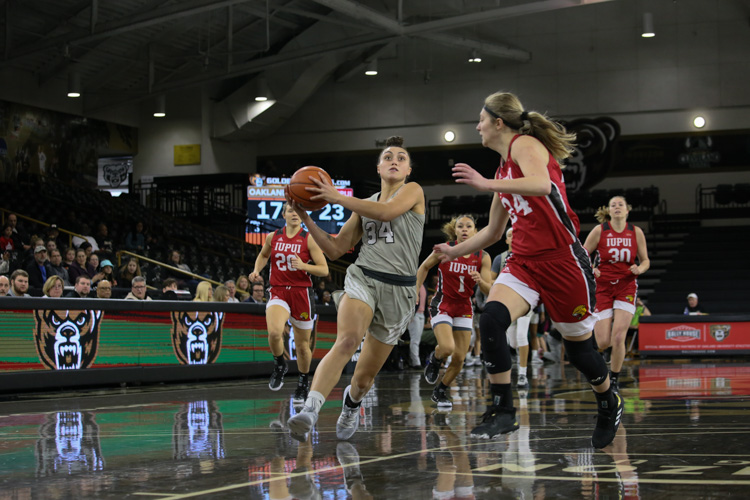 The Oakland University women’s basketball team returned back to the O’rena on Saturday, Feb. 8 for a second straight home game after being on the road the previous week.

The Golden Grizzlies took on Indiana University-Purdue University Indianapolis (IUPUI) for another conference game. In their last game vs. IUPUI, the team lost 76-41. This time around, the Jaguars won again, 89-63.

Oakland was off to a slow start, and they trailed behind throughout the whole game. The Golden Grizzlies couldn’t start a lead. In the second quarter, the team scored just eight points.

“I just felt like we did some things to hurt ourselves,” acting Head Coach Ke’Sha Blanton said. “Early on we gave them a lead and wish we were battling back the whole game.”

“We just have to fix a few things from an IQ standpoint, and I think we will be OK,” Blanton said.

It was a large loss for Oakland, but the team said it was a learning experience and they are taking what happened in this game on the road next week.

“I took from this game that we just have to keep putting in the work,” sophomore Kahlaijah Dean said. “Everything isn’t going to be perfect and we have to mentally prepare ourselves for that.”

IUPUI also currently has the 2018-2019 Horizon League Player of the Year, Macee Williams, on their roster. Williams scored a total of 31 points in the game.

“We knew she would be tough to defend, we just needed to adapt once the tip was off,” Dean said.

The Golden Grizzlies have a few days in between to get ready for their next game on the road, and Blanton said they are ready to get back to work to fix what needs to be fixed.

“A lot of film early on in the week and just trying to show us some things we missed and some things were not doing that we’ve got to start thinking as the game goes on,” she said. “We also gotta get back to the basics of shooting shots and doing the things that we do, which is playing with toughness and grit,” Blanton said.

According to Dean, the team knows that defense is the key moving forward.

“We know what needs to be done and we have to apply that every day,” she said. “We are prepared for this week’s match up, and we know defense is key so if we continue to defend and stick to our principles we will come out on top.”