CAS helps students make careers out of their degree 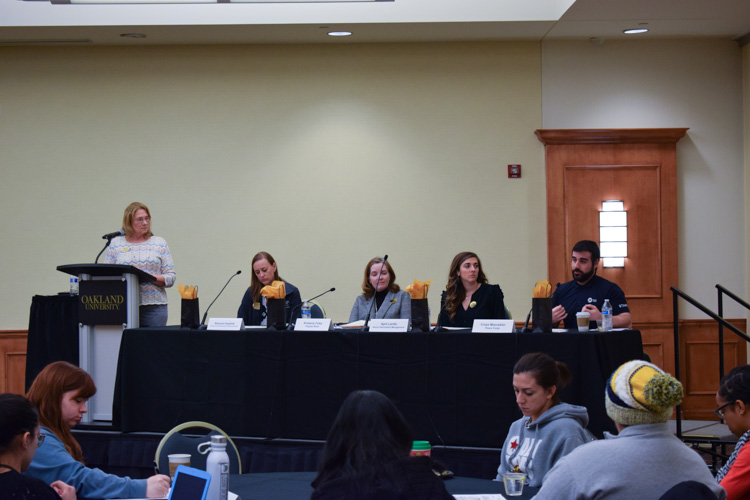 Speakers share stories on how they used their humanities degrees and skills to build careers.

To help students realize how their degrees can be used, the Oakland University College of Arts and Sciences (CAS) and Career Services hosted the Marketing Your Humanities Degree event Thursday, Jan. 30. Four speakers told their stories and worked with students to help them come up with plans for the future.

The event started off with some words from Kevin Corcoran, dean of the CAS.

“More and more employers are talking about liberal arts degrees as the degrees of the future,” Corcoran said, summarizing an article from Inked Magazine. “If you think of the real problems that face our world over the next 50 years … the kinds of problems that face the world are not simple problems. They are not problems that lend themselves to coding, to building a better mousetrap.”

To Corcoran, problems like climate change and other multifaceted issues require a certain level of creativity and deeper thinking that is encouraged by the pursuit of a humanities degree. Some of these skills include working with other people and working around the ambiguity presented by what he called “wicked problems.” Another skill Corcoran highlighted is a knowledge of ethics, a skill he accused Big Tech of lacking.

One of the speakers, Cross Mooradian, a Peace Corps recruiter who turned an OU anthropology degree into a life with the organization, told his story first.

“Over the course of my education here, every professor I had at some point brought up [the] Peace Corps,”  Mooradian said. “By the time I graduated, I thought, ‘OK, there might be something to this if all these different individuals can agree on [the Peace Corps].’”

Interested in the idea of joining, Mooradian looked into the teaching career path for the Peace Corps, worked at a charter school for a few months, applied to be a Peace Corps teacher and was accepted to work in the southern African nation of Zambia. He enjoyed the work so much that he volunteered for three years instead of the mandatory two and has remained with the Peace Corps ever since.

Mooradian believes it was his anthropology degree that gave him an advantage over other applicants.

“They saw that I had the technical skills with my teaching experience, but what really sold my application was my anthropology degree,” he said. “They noted [in my interviews] my background with cultural sensitivities and passion and curiosities, and that really helped me get a place.”

The very skills that Mooradian used are what Career Services calls fundamental learning achievement goals (FLAGs). These are skills like critical thinking and an awareness for diversity that are picked up pursuing a CAS degree.

Using the FLAGs, students can reflect on what they have and how they can use it.

“These are things you are already doing,” Shannon Esselink, CAS director of advising services said. “We are just give you a way to articulate it and a space to capture it.”