Oakland women fall to 3-4 in league play vs. Vikings 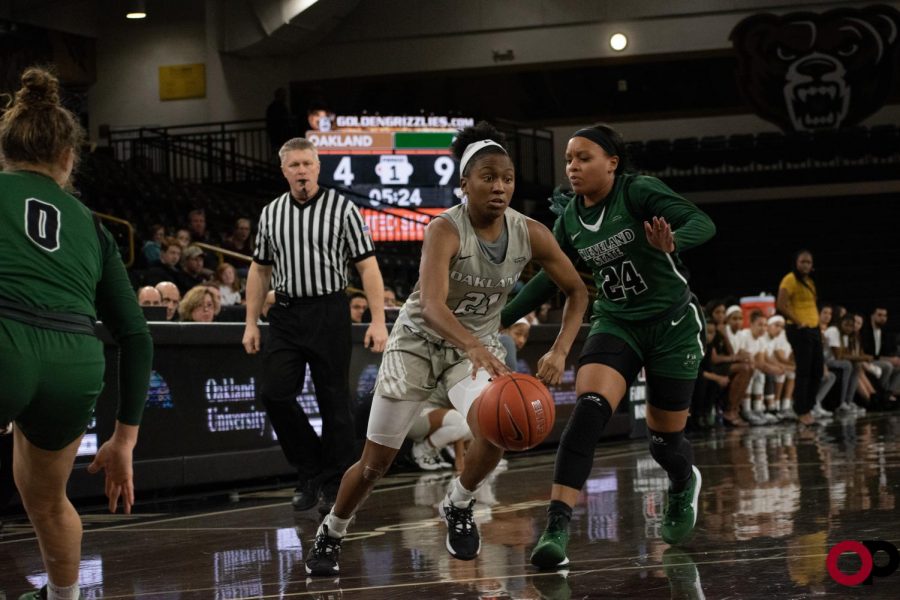 The Golden Grizzlies fall to the Cleveland State Vikings 79-58 on Saturday, Jan. 18 in the O’rena.

The Oakland University women’s basketball team was back on the blacktop in the O’rena on Saturday, Jan. 18, after a day off, as they took on Cleveland State University Vikings on Childhood Cancer Awareness day.

It was a pivotal game for the Golden Grizzlies, as they were one of the five teams tied for third place in the Horizon League.

The Golden Grizzlies had a slow start in the first quarter, since the Vikings started the game with an 11-4 lead. That lead didn’t hold, as the second quarter came around and the Grizzlies went on a 10-point run.

“We were able to keep them scoreless for a couple minutes, and we were taking good shots and wearing them down to end the half,” sophomore Kayla Luchenbach said.

At the half, the Golden Grizzlies were only behind by five points. One of the keys for the second half was for Oakland to defensively stop Cleveland States’ hot 3-point shooting, as the Vikings went 4-7 from 3-point range.

“Our defense was the thing that hurt was most,” Luchenbach said. “We didn’t take the same pride on the defensive end like we usually do.”

The lack of defense showed in the second half as the Vikings went on to win the match 79-58, which put the Golden Grizzlies further down in the standings, currently tied for seventh with Northern Kentucky.

“This game hurt, we didn’t play true Oakland basketball,” Luchenbach said. “We have to learn from this experience and this feeling and help it fuel us going into next weekend.”

Oakland also struggled on the offensive side throughout the game. In the first half, the Golden Grizzlies only shot 44% from the field.

“One major takeaway from this game is that we are a defensive team, and we are struggling offensively right now,” Luchenbach said. “Our defense is truly what wins games for us, and this game really showed how important it is for us not to take plays off.”

Coming off being home for two weeks straight and losing in a tough battle to the Vikings, the Grizzlies have no time to stay in the past and hit the road next week, taking on Northern Kentucky University and Wright State University.

“This week, we have a great opportunity against two really good teams,” Luchenbach said. “We match up very well against Northern Kentucky. Wright State is a strong team that has a lot of experience, it will be a good test for us, as a younger team to make a statement.”

Currently, the Golden Grizzlies are 8-10 overall and 3-4 in the conference. No matter what the standings look like right now, the team is still aiming for a championship.

“We still have a lot of time to come back and put ourselves in line for the playoffs to reach our goal of winning a Horizon League Championship,” Luchenbach said. “We are going to keep battling and fighting till we get there.”

The Golden Grizzlies are back on the road this week to continue conference play. On Thursday, Jan. 23, the Grizzlies take on the Norse at Northern Kentucky University at 7 p.m. They continue Saturday, Jan. 25 against the Raiders at Wright State University at 2 p.m.