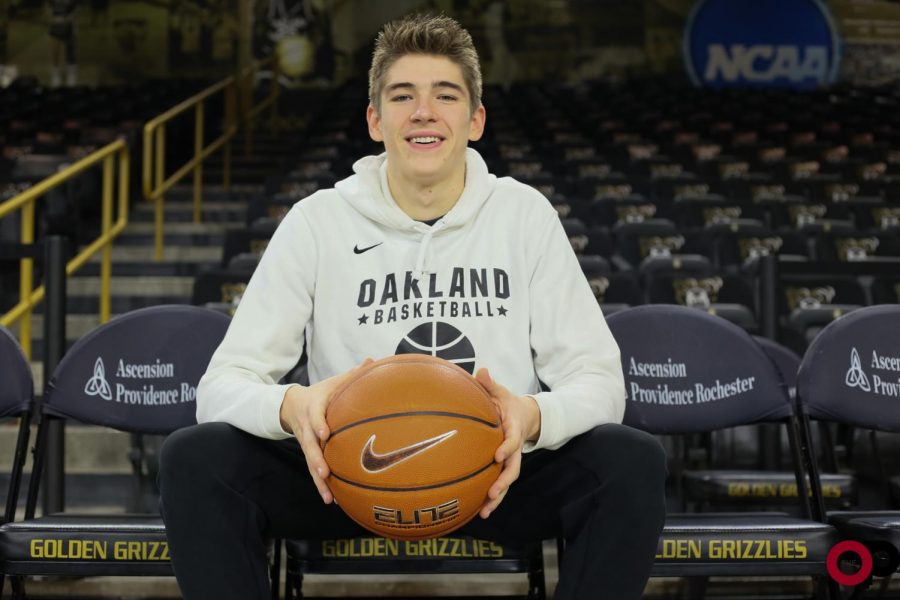 Freshman Blake Lampman was named Horizon League Freshman of the Week on Jan. 13.

Travis Bader is considered one of the greatest Oakland University basketball players of all time. According to the Lansing State Journal, Bader called head coach Greg Kampe last summer and said, “I’ve found the next me.”

That “next Bader” is Blake Lampman, a freshman out of Haslett High School who is consistently gaining minutes in Kampe’s lineup, and has become the best 3-point shooter on the team.

On Jan. 13, Lampman was named Horizon League Freshman of the Week after hitting 7-12 3-point shots and averaging 12 points per game. A walk-on, he didn’t expect to rise up through the rotation as quickly as he did.

“It’s awesome to think that I was kind of at the bottom when I came here and now I’m starting to work my way up through the rotation,” he said. “Kampe is calling plays for me at the end of the game, it’s a really cool experience.”

On Saturday, Dec. 7, Lampman made his first Division I start against Bowling Green in Ohio. Despite not playing up to his standards, shooting 1-7 from 3-point range and going 1-3 from the free throw line, Lampman valued the experience.

“That was pretty shocking to me,” he said. “I didn’t have the best game, but what can you do? It was cool.”

Growing up close to East Lansing, Lampman grew up rooting for Michigan State. On Saturday, Dec. 14, Lampman took on his favorite coach from his childhood, Tom Izzo, and his favorite team at Little Caesars Arena in Detroit.

“That was a really cool experience, I grew up watching them, going to their games and looking up to their players,” he said. “When I stepped on the court with them, that was truly a cool experience.”

Starting off as a walk-on and being recruited late in the process, Lampman was relatively unknown, but has since made his mark on the Horizon League and his team.

“You definitely have to earn respect anywhere you go,” he said. “As a freshman, no matter if you’re on scholarship or a walk-on, you’re still going to be on the lower side of everything, so you have to earn it. I think we have a great bond here and we’re really forming a family.”

The Golden Grizzlies started 1-3 in conference play, with home losses to Wright State and Northern Kentucky. Despite the early-season struggles, Lampman said the team is not concerned, especially following a bounce back win against Cleveland State.

“I’m not too worried about it,” he said. “We really needed this win to jump start our season, the win against Cleveland State was huge.”

As for the Bader comparison, Lampman sees it, and hopes he can become the player that Bader was for the Golden Grizzlies.

“Obviously Travis was super successful, so if I could be anything near his success, that’d be really cool,” Lampman said. “I think we have a lot of similarities in our game.”

Lampman and the Golden Grizzlies return to their home court Thursday, Jan. 23 at 7 p.m. against the University of Illinois-Chicago Flames on superhero night.