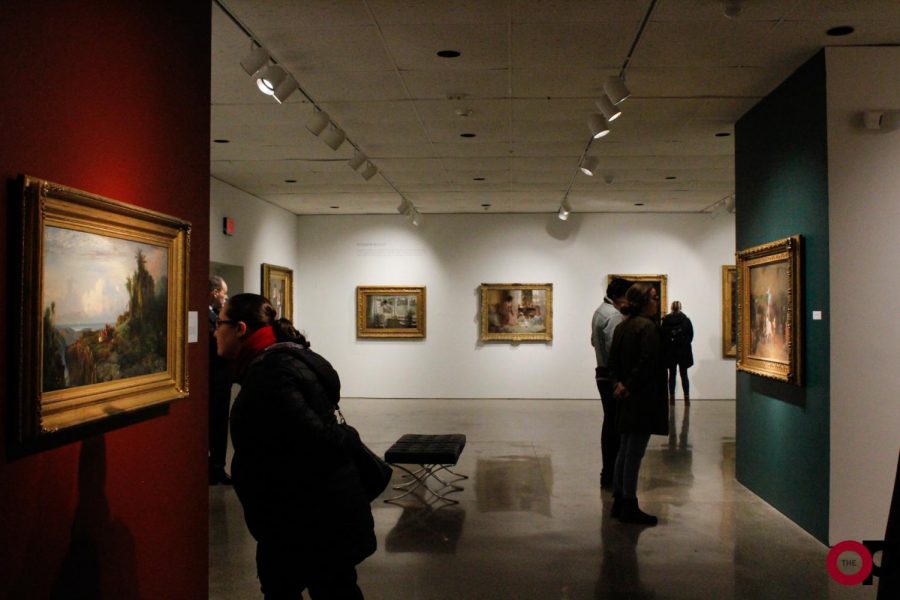 This collection of 40 paintings will be available at the OU Art Gallery until April 5.

The Oakland University Art Gallery is showcasing the “American Paintings” exhibition from the Nancy and Sean Cotton Collection in a partnership with the Detroit Institute of Art (DIA).

According to the gallery’s website, the exhibition contains 40 paintings from 1850-1950 and allows visitors to get a “fascinating historical snapshot.”

Monica Bowman, who visited the gallery, said the paintings give a great perspective to the complex America was creating at the time.

“It says a lot about the quality of American painters with regard to the 19th century,” she said. “You can see everything from nature to industrialism and everything in between.”

Bowman also liked the didactic labels next to the some of the paintings. She said it allows every viewer to have some discourse on what they were seeing in the painting.

“I think instead of just taking the painting for what it is and maybe just looking at it and dismissing it or judging it, maybe we can also look at the artist’s lives and how they contributed to the meaning of the painting,” she said.

However, not all the artwork has didactic labels. According to Dick Goody, director of the OU Art Gallery, the paintings with labels are the ones that can be discussed further.

For example, only one piece in the collection is painted by a woman, Jane Peterson. The label next to her painting, “Women and Children in the Park“ explains why she is the only woman in the collection and goes into detail about her background and schooling. By the turn of the century there were more women being enrolled in art schools, however, it was still rare. This makes Peterson’s inclusion in the collection even more significant.

According to Goody, this exhibition should leave visitors with questions.

The collection features paintings from before, during and after the Civil War, yet there is a complete lack of any portrayal of this in the artwork. Instead, Goody said the artwork shows an “idealized” and “picturesque” version of that time period.

“We’ve got this country that’s gone through this tremendous struggle — with half of the country wanting to enslave people and the other half not being keen on the idea — and we have this war,” he said. “There’s definitely not a great appetite to dwell on these things in the 19th century.”

According to Goody, there will be a few historical speakers coming to the gallery to explain why viewers see a lack of the struggle and conflict in the artwork of this era.

Leo Barnes, the OU Art Gallery manager, said the gallery tends to have a lot more contemporary artists, so this collection is a change of pace from the usual.

“It was a nice opportunity to work with the DIA and bring something new to Oakland that students typically wouldn’t have here,” he said.

Goody said if students have a half an hour of free time, they should come “have a seat, relax and enjoy.”

“I would just like as many students to come and see it as possible, because you don’t get the opportunity to see work that has been around for this long in this country,” he said. “It’s pretty remarkable, and there are some remarkable paintings.”

The opening reception was Friday, Jan. 10, and this collection will be available at the gallery until April 5.