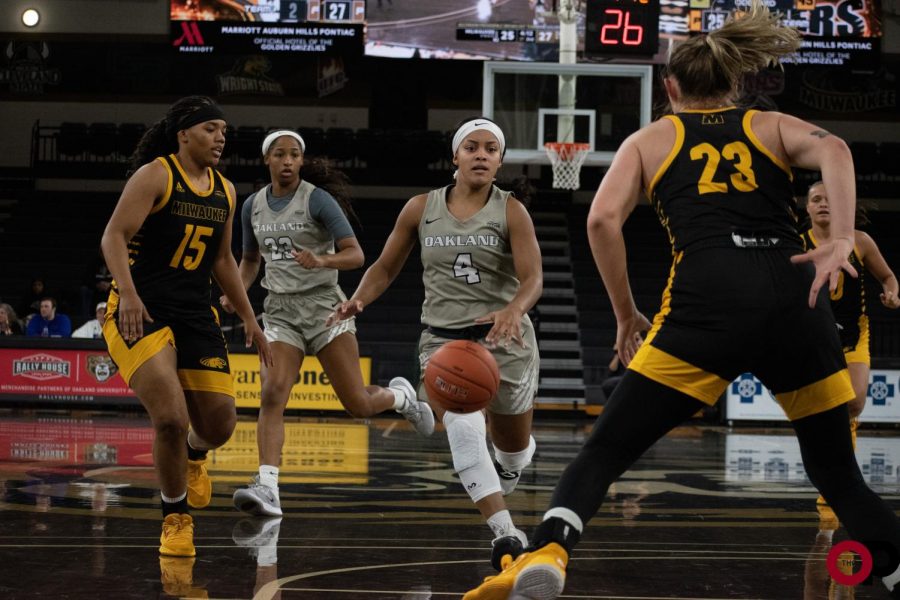 The Golden Grizzlies achieve a 78-62 victory over Milwaukee on Saturday, Jan. 11.

Both teams came into the game sitting at 2-2 in Horizon League play, tied for fourth place. The Golden Grizzlies came out on top, defeating Milwaukee 78-62. Jalisha Terry led the team in scoring with 19 points, with Kahlaijah Dean not far behind at 17 points.

Autumn Kissman had 14 rebounds and 13 points, recording a double-double as the Golden Grizzlies defeated the Panthers, only trailing for three and a half minutes of game time.

Oakland jumped out to an early lead, but Milwaukee was able to battle back, utilizing their zone defense and finding the gaps in Oakland’s defense. Eventually, the Panthers found their first lead at 17-15.

After consecutive traveling calls, Oakland was able to tie the game up at 19 before missing a go-ahead shot to end the first quarter.

Both teams struggled more offensively in the second quarter than they did in the first, but Oakland was able to find more opportunities to score, eventually taking a six point lead at halftime, 35-29.

The Panthers offense slowed down considerably after shooting 57% from the field in the first quarter, the Golden Grizzlies defense held them to 30.8% shooting from the floor and 0-6 from three in the second quarter, which proved to be the pivotal period in this game.

“We went back to the basics and started to do the things we know we can do, which is defend one-on-one and have great help side defense,” Acting Head Coach Ke’Sha Blanton said. “We were a little out of character in the first quarter but we got it back together.”

Terry still led all scorers with 14 points at halftime, consistently getting inside, finding space and getting to the free throw line.

“It felt really good getting to the basket and getting those calls, doing what I do best,” Terry said.

Oakland opened up the third quarter on a 10-2 run, capped off by a three-pointer from Dean. A 45-31 score forced Milwaukee to take a timeout. After the timeout, the Panthers were able to fight back into the game, chipping away at the lead.

Dean started off the fourth quarter hitting back-to-back three pointers. Both teams were getting good looks offensively, making the fourth quarter an offensive showing for both sides. After four minutes, the Golden Grizzlies had 12 points in the quarter.

After going down 13, Milwaukee shifted to a more zone-heavy defense, something they had been using throughout the game. Oakland was still able to find gaps in the defense, with players like Dean and Terry getting inside and beating the press Milwaukee implemented with four minutes remaining.

“We knew we had to attack, and not stay stagnant,” Terry said. “We moved the ball well and attacked the gaps whenever we saw it (zone).”

Oakland was able to hold onto the lead, improving to 3-2 in Horizon League play. However, Blanton said the team is not satisfied yet.

“We’re excited but we aren’t satisfied, we’re looking for more every time we step out on the court,” she said. “It’s great, but we have to keep it going because we have bigger goals as a team, which include us winning many, many more games.”

The next home game for the women’s team is Thursday, Jan. 16 at 7 p.m. against Youngstown State.