‘The Handmaid’s Tale’ is unnervingly believable 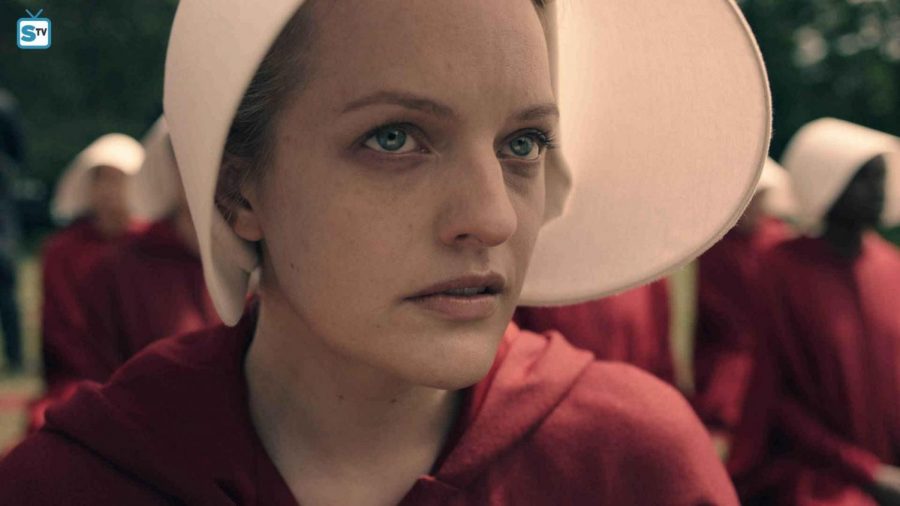 “When we think of the past, it’s the beautiful things we pick out,” Margaret Atwood wrote in her 1985 novel “The Handmaid’s Tale.”

In the years since its release, the renowned novel has been remembered as “beautiful” and has been rerendered into a Hulu original series. Although the medium and some details are altered from the original, the powerful and timely message about human rights reigns true still.

Set in a dystopian future, the United States is crumbling and being consumed by a new age, led by the Republic of Gilead. The world’s reproductive ability has been slighted, reaching dangerous levels. Hence, Gilead construes biblical ideas to justify isolation, silence women’s voices and facilitate rape.

Offred (Elizabeth Moss) is at the center of Gilead’s movement, serving as a handmaid — a baby-making slave — under Commander Fred Waterford (Joseph Fiennes). Moreover, “Offred” is simply a blend of words or a portmanteau symbolizing Waterford’s control: “of Fred.” Offred is a borrowed name and a constant reminder of hierarchy.

This control leaks into almost every aspect of handmaids’ lives. Their daily schedule is equipped with cautiously moving about someone else’s home and occasional accompanied shopping trips to stores resemblant of children’s picture books. Reading of any form is forbidden to all women and girls, even the Bible — the very book on which their law is supposedly built.

Specifically, the story of Rachel and Billah is basis for the handmaids’ position in every commander home. Billah became the biological mother of Jacob’s two children because his wife, Rachel, was barren and Billah was seen as their property. Gilead translates this into modern times by forcing handmaids to copulate monthly with their assigned commanders while their wives are present — this is known as “the ceremony.”

Moss’ emotional adaptation of the novel’s imagery is memorizing and unfaltering. Her character, Offred, dances with despairing and hopeful reactions to women’s steady reduction of human rights. Despite being captive in a mind-boggling society, Offred radiates strength and gives glimmers of encouragement in the most dire times.

There are currently three seasons released on Hulu, but the series is predicted to have a continuation, especially following Atwood’s newest novel, “The Testaments,” a sequel to “The Handmaid’s Tale.” Atwood has been involved in the production of the series thus far, ensuring vivid accuracy to her novel and timely connections.

The “before” is shown as eerily reflective of today. Gilead’s takeover began with putting motherhood on a pillar, fetishizing femininity and degrading the LGBTQIA+ community. Their movement further diminished women’s rights, and feminist protests followed, but Gilead already had a firm grip on the future.

Today, women have had restrictive body standards reflected in media for decades, according to CNN. The phrase “rape culture” has been prevalent for 50 years, shedding light that awareness does not always provoke immediate change. As recently as March, a room of only men discussed the future of women’s health.

“The Handmaid’s Tale” is a beautiful adaptation composed of remarkable actors that is sure to leave you puzzling today’s current events. The moral of “The Handmaid’s Tale” is that people can undertake flexible belief systems that can make the unbelievable seem normal. Hence, taking step into Gilead can easily shift from a breathtaking example of cinematic work to unnerving.