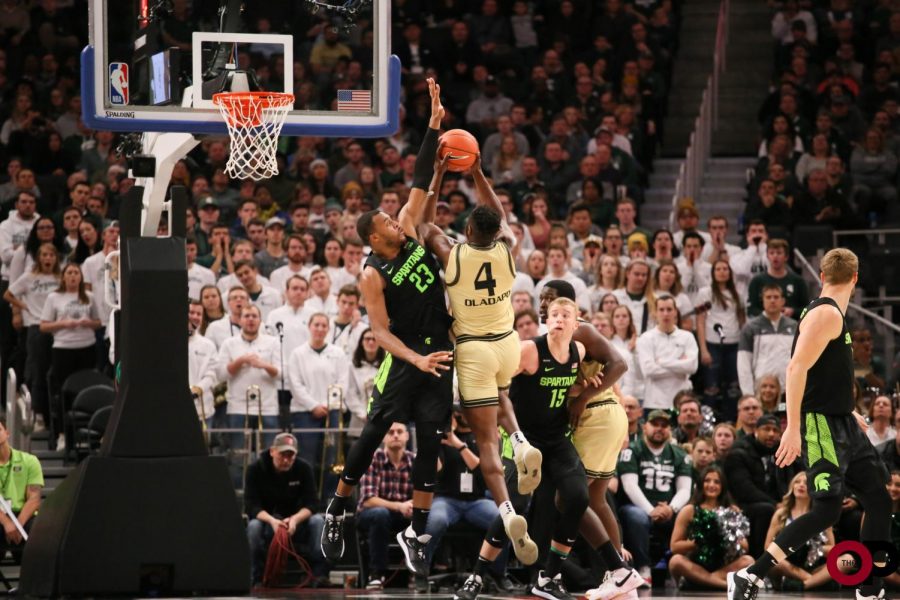 For the 18th straight time, Michigan State University (MSU) defeated Oakland University in basketball. This time around in front of 14,000, MSU’s superior size and strength proved to be the difference against a men’s basketball team that is different than a typical Golden Grizzlies unit.

“It’s so good to come down here,” Izzo said about playing in Detroit. “I’m appreciative of the arena and what they done, and of Greg and what he has done to keep this thing going.”

The Big Ten/Horizon League matchup has always been more than basketball, and this year’s showing was no different. Prior to the game, both coaches came together to present a check in partnership with Coaches Beat Cancer. Both coaches mentioned the importance of the game being taken with dual motives, to not only bring college basketball to Detroit, but also to raise money and awareness for cancer research.

“Greg Kampe is an interesting guy,” Izzo said. “When he took on this campaign for cancer, he really got some coaches involved, and I am his anchor because I really cannot say no to the guy.”

The game held scoreless for the first two and a half minutes, until MSU broke the drought with two free throws. Oakland quickly answered back, forcing some turnovers and grabbing rebounds. The score held 4-4 at the first media timeout.

Oakland gained a lead shortly after at 6-4, but MSU battled their way back on the offensive glass, going on a 16-7 run.

After that, the Golden Grizzlies struggled to get any offense going, shooting consistently around 25% from the floor and missing shots close to the basket.

“We’re not a good shooting team — if you look at our numbers, you’ll see that,” Kampe said. “They’re a good defensive team and so are we. I’ll give them credit for guarding us.”

Kampe credited the referees for calling a fair game, one that was officiated very liberally, letting the players play physically from the opening tip.

“We lost that battle inside,” he said. “There was a lot of contact and physical play down there that was called consistently, called the same both ways, which you want as a coach. For us to beat Michigan State, the fouls were going to have to be called, it couldn’t be a physical game, completely even.”

The physical style of officiating led to many rebound opportunities, of which Oakland was unable to capitalize on. Oakland was out-rebounded 31-54, with MSU grabbing 13 offensive rebounds, which led to easy second-chance points.

Despite the 72-49 loss, Kampe praised the team’s emphasis on defense.

“I’m angry with everything,” he said. “You may not believe this, but we actually played a hell of a defensive game … We were in the gaps we needed to be. We held the player of the year (Cassius Winston) to nine points.”

Oakland held Michigan State to 7-33 behind the arc, and did not make things easy inside the arc either, allowing just 45% (26-58) of the Spartans’ shots to fall.

It was implied, due to late transfers and two fifth-year seniors in the front court, that the Golden Grizzlies’ offensive strategy would be shying away from shooting three-point shots. The implications were correct, as Oakland shot 31% (7-22) from three-point range.

The 2019-20 team has a different style than any of Kampe’s previous teams. With two big men in Xavier Hill-Mais and Brad Brechting leading the way, the strengths of the team more closely align to the strengths of MSU’s team, which led to a below-average offensive output.

“We were a team that could run and shoot, we’ve always been a team that had one big that was good but we were a perimeter oriented team,” Kampe said. “That was the antithesis of Michigan State. We would always have close games with them because our strengths were their weaknesses. This year, our strengths are their strengths. Our strengths against theirs scared me coming into this game.”

The outcome of this game affects the overall record for the team, but does not affect the Golden Grizzlies’ end goal: making the NCAA Tournament. For the members of the Horizon League, the easiest road to the tournament is winning the Horizon League tournament, something the team is much more suited for.

“In our league, nobody is going to be able to guard our two big guys [Hill-Mais, Brechting],” Kampe said. “There’s a lot of ways to win, there are a lot of very good teams that do not shoot the three.”

In his closing statement, Coach Kampe reiterated the goal, reminding everyone that the Horizon League play is the main goal.