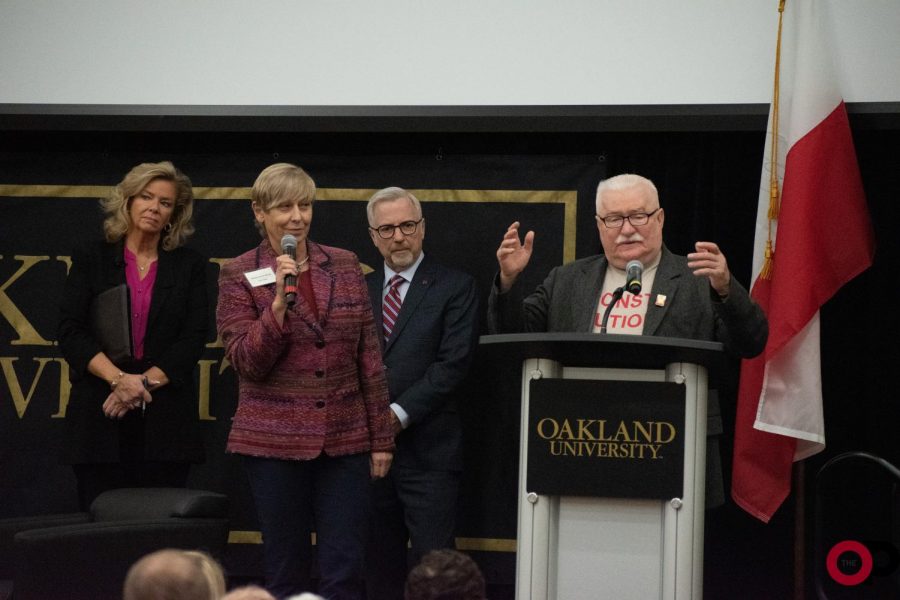 Former president of Poland, union leader, activist and Nobel Peace Prize laureate — Lech Wałęsa has held several titles thus far. Last Friday, he added Oakland University guest speaker to his list of positions. Over thousands of listeners were drawn as he introduced the moral and political beliefs his life has inspired.

Just a short time ago, Poland was operating as a communist nation, until Wałęsa became the first president of Poland to be elected by popular vote in 1990. Poland’s political transformation was achieved through many years of Wałęsa and like-minded people banding together and taking action.

“This is my message — do not underestimate democracy, or you may end up in trouble,” Wałęsa said.

His activism stemmed from his original trade, electrical work, where he spent time along the Lenin shipyard. As an electrician, he further planted roots in his career and joined a trade union. From this moment, he had contracted the democratic bug, and the communist government took notice.

The former government made note of his beliefs, which led to several of his arrests. He co-founded the Solidarity trade union, gathering many more followers and initially boosting the morale of the movement. Solidarity was soon outlawed, leading to Wałęsa’s most recent imprisonment in the late 1980s.

“The old era was full of very bad divisions in the world,” Wałęsa said. “The world was divided into two blocks, ready to clash. Communism was getting prepared to fight, using nuclear weapons, of course, but using shared forces, we disarmed that danger.”

Surely, his dream was not lost within his cell, but only grew more precise. In less than a decade, Wałęsa moved from incarceration to the head of the country.

“Everything depends on what we construct after the fall of communism,” he said. “If the new construction is better and it is a better world, then we will be able to judge if it was a good idea to overthrow that regime.”

Therefore, Wałęsa is leaving the impression of Poland to emerging generations. His Friday night lecture also offered advice about world government to its attendees, and although he has strong ideas regarding politics in the modern-day United States and Poland, as of a true democratic mind, he believes we are all entitled to our own thoughts and opinions.

“Do not take anything I say as instructive or teaching a lesson … The point is that I lead that struggle in the past, so I feel co-responsible for what is currently happening in the world today,” Wałęsa said. “That’s why I will continue to look for answers. I have my own ideas on almost any topic, and if you find them right, take them — if you find them wrong, just improve them.”