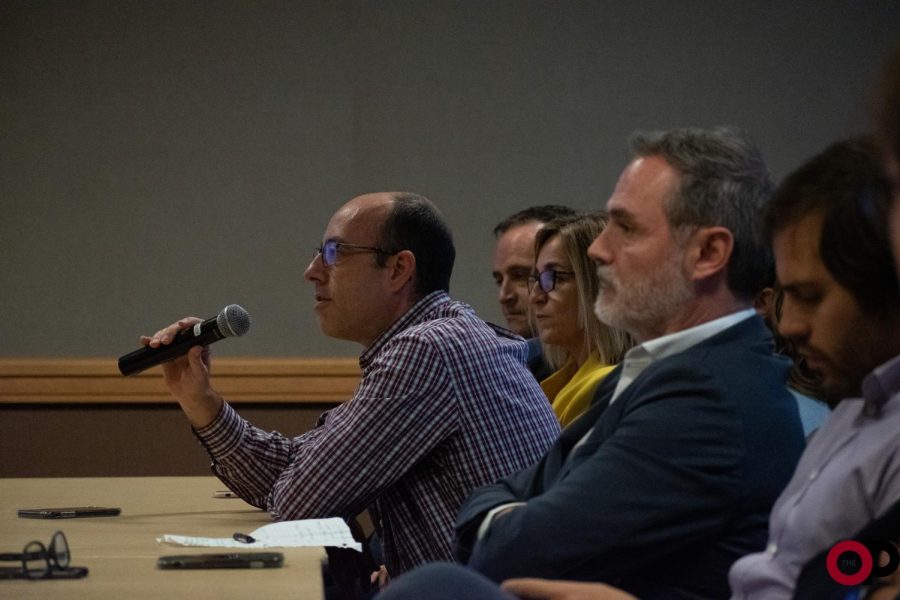 Presenters sit roundtable to discuss effects of and differing viewpoints on the current protests and strikes around Catalonia, Spain.

With protests and strikes happening around Catalonia, Spain, Oakland University Associate Professor of Spanish Adolfo Campoy-Cubillo organized a panel discussion to go over the effects of the current situation surrounding the region. By using a roundtable discussion, Campoy-Cubillo was able to gather students and faculty on campus to discuss this matter.

“It was a reaction to the events happening in Catalonia during this week,” Campoy-Cubillo said. “There’s been a lot of confrontations in the streets, a lot of political and personal tension. We can only contribute with what we do today, have our roundtable and give people the opportunity to talk and share ideas in public.”

Catalonia is pushing for independence by a social and political movement against Spain due to the large difference in cultural heritage.

Over the week, the supreme court in Spain had decided that nine Catalan politicians deserve jail time for being part of the independence referendum back in 2017. The Supremo de Justicia de Cataluña (the Catalan Supreme Court) will try six more politicians, and an additional seven are still in exile. The Audiencia Nacional (Spanish High Court) is also currently investigating four police chiefs.

After all this, Catalonia is facing a 155 Article threat from Spain, which means the federal government is allowed to take over the regional government.

Freshman Oriol Paicio Sunyer moved to the United States in 2008 from Catalonia due to a family job transfer.

“I wish I was there. All of my cousins who are my age, all of the people I know from over there are out with these several hundred thousands of people that are marching to Barcelona right now,” Sunyer said. “From over here, I mean, there’s only so much you can do from the other side of the world, but you can definitely talk to people, you can definitely come to things like this and it’s as much as we can do.”

Sunyer came to the event with an open mind and was willing to hear and learn from both sides of the argument. This is why Campoy-Cubillo held the event, for students and faculty to be able to learn from each other and share opinions.

“A lot of the professors that were on the phone with us today, they presented a lot of information that I wasn’t aware of beforehand,” Sunyer said. “It helped inform myself more, because I will be having this conversation and talking about this issue way more outside of this room, and hearing the other and the information from the other side and also a lot of information from our side helped inform me, and I hope it will help me for talking to other people as well.”