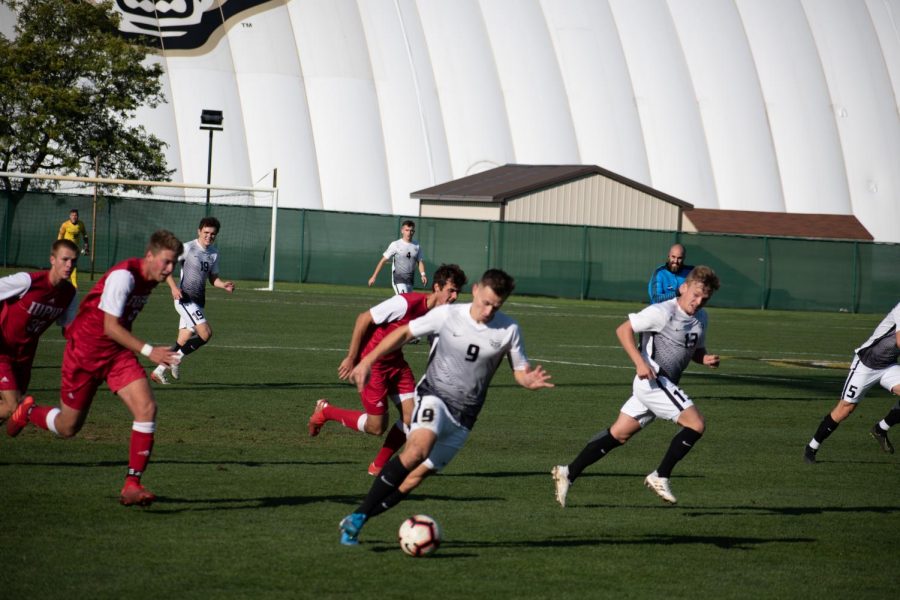 Oakland’s soccer team was coming off of a 3-2 loss at home to Western Michigan and entered this home match with IUPUI with a 3-0-1 record, only tying Detroit Mercy in double overtime.

Dylan Borzcak, who has led the team in points this season, took control of the game early. He scored the first goal in the 21st minute after a shot from Cameron Wilde ricocheted off the crossbar. Borzcak took a second, gathered the ball and put it in the bottom left corner.

“It felt great,” Borzcak said. “After that first goal, the game kind of just opened up.”

After Borzcak’s initial goal, the remainder of the first half consisted of Oakland controlling the ball, pressing forward on the Jaguar defense and creating scoring opportunities. The first half ended 1-0, with neither team being able to capitalize on good looks. At the half, Head Coach Eric Pogue made adjustments to the game plan.

“They were man marking Noah Jensen, so I wanted him to float out into the open space on the wing,” Pogue said. “I wanted to create an overload on one side and leave Dylan alone on his side, which is dangerous. I also thought putting some guys with pace in there like Dawson Schrum and Mikey Ketteman would help stretch the defense out.”

In the second half, the game opened up for the Golden Grizzlies offense. Borzcak and Evan Sawula were able to get behind the defense and create scoring opportunities for the team. The Oakland offensive attack was able to continually create shots. They out-shot IUPUI 21-2.

The second half started off strong with Oakland creating pressure and drawing a penalty in the box. Jensen stepped up to the spot to take the penalty kick and chipped the ball in over the head of the goalkeeper.

After stretching the lead to 2-0, Oakland kept the pressure on and were able to hit the back of the net two more times in the final 20 minutes of the game. In the 74th minute, Charlie Braithwaite received a crosser from Borczak in front of the goalkeeper and converted, then in the 88th minute, Mitch Meldrum was able to find an open lane off a long pass from Ketteman, and the team took a commanding 4-0 lead.

“It’s incredible,” Borzcak said on the 4-0-1 start. “We’re just taking it one game at a time. Our focus is to get a ring for the school and for us.”

Pogue is seeing improvement in his team with each game. Next up is a game against the Dayton Flyers in Dayton, followed by a league match against the University of Illinois Chicago (UIC) in Chicago.

“Obviously, Dylan has been fantastic and Charlie has been stepping up,” Pogue said. “I think an unsung hero in this was Spencer Nolff, he was fantastic. Elliott Bentley, too. Our whole back line was fantastic. I think every game you just try to get a little bit better.”

The next home game for the men’s soccer team is senior night against Michigan State on Tuesday, Oct. 22 at 7 p.m.