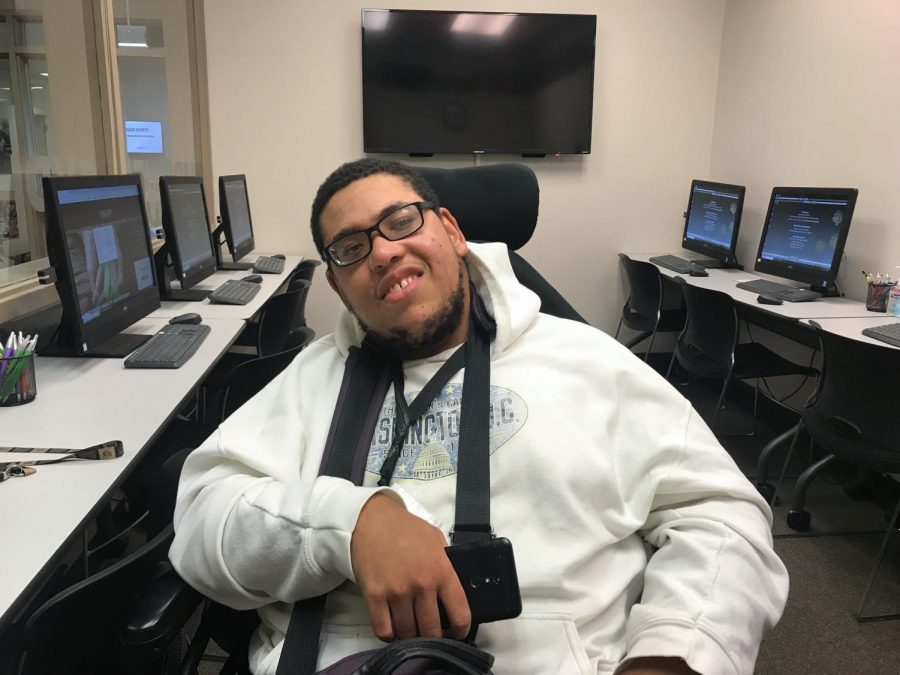 Elijah Sanders, junior, was born with cerebral palsy. He doesn’t let that stop him from working toward his dream of getting a law degree.

Elijah Melvin Sanders, a junior at Oakland University, was born with cerebral palsy, a group of disorders that affects a person’s ability to move and maintain balance and posture.

His disability often presents itself before his ability, which may make students around him find it difficult to approach and connect with the person within, according to Sanders. Without having friends to talk to or someone with whom he could share his feelings, he started to doubt himself and his place at OU.

During the first three years of living on campus, his loneliness and depression were deepened.

“I was lonely, and my thought process was quite dark,” Sanders said.

Sanders has faced many obstacles, not only due to his disability but also because of his sexuality.

“Being an LGBTQ[IA+] is definitely an obstacle,” he said. “As a bisexual individual, it’s not easy making friends, and finding relationships, especially being on a wheelchair and having that on a college campus.”

The Americans with Disabilities Act of 1990 allowed the general public to become more informed about disability. Though society has changed toward disability becoming more easily accepted and understood by more people than in the past, the reality people with disabilities face is quite different, according to Sanders.

“It’s easy and acceptive, but when it comes to finding true relationships, it’s a bit hard,” he said. “It’s a bit easier for me to be empathetic toward people because of my disability. More so, it’s a fear that they won’t really like me, and that they are around because of what they can get out of it.”

Throughout his life, Sanders has always had a concern about people’s intentions to be around him. Facing contradictory stereotypes at every turn, this concern has been his daily life.

“So, it’s always a question in the back of my head: Is this person really around me because he loves me or is he around because of the chair and he feels bad for me?” he said.

Despite his disability, Sanders tries his best to conquer the remaining years of his college education at OU. Sanders is double majoring in political science and history, pursuing a degree in law. With that interest, he decided to join OU Student Congress (OUSC) in 2016, not knowing this would change his life.

“But then I found Student Congress,” Sanders said. “It really has been the one thing that has saved me, time to time. So, I have always had that keep me going.”

Sanders is currently an OUSC senior legislator. Before he found his position in OUSC, he said his mentality was dark, full of anger and frustration. However, soon after he became a member of this organization and earned his current position, he began to see the bright side of his future and realized what he really wants to do with his life.

Along with OUSC, he also has been in many other clubs. He was vice president of Students Towards Understanding Different Abilities for about a year and was a member of the club Actively Moving Forward.

Despite many obstacles he had faced in the past and those he might face in the future, he plans on moving forward to achieve his dream.

After graduating from OU, he plans on working in a middle school, teaching history and civics to save up money to go to a law school at Howard University in Washington, D.C.