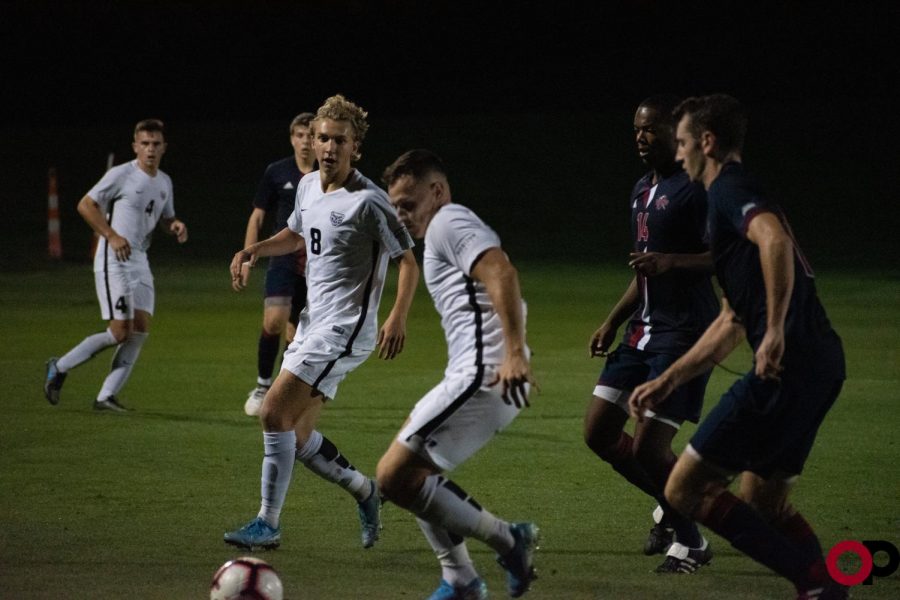 A tough-fought match between two rivals ended in a 1-1 draw in the chilly evening mist on Saturday, Sept. 28. The University of Detroit Mercy Titans visited Oakland to face off in their only match of the season.

“I think for guys that are playing at a high level, it’s tough to prepare for their defense,” Head Coach Eric Pogue said. “They just don’t see it.”

This led to a stagnant first half, where there were few scoring opportunities for either team. The biggest scoring threat in the first half was off of a long strike by Dominic Gatson of Detroit which hit the crossbar. At the half, neither team was able to reach the back of the net, and the score sat at 0-0.

“In the first half we were impatient,” Pogue said. “We were nervous to play balls into guys because they had guys right at the backside and we were getting countered.”

The second half proved different, as both teams were able to get looks at the goal. The half started off with Dylan Borzcak drawing a foul deep in UDM territory, which led to a free kick that missed wide right. Shortly after, the Golden Grizzlies had a chance at goal, but the shot went slightly left of the post. After multiple chances at a goal, the Golden Grizzlies finally broke through.

Borzcak and Dawson Schrum were able to assist Spencer Nolff on a goal near the right post in the 69th minute, breaking the drought and scoring the first goal of the game. The goal was Nolff’s first of his senior season. Borzcak, who has been the team’s leading passer and point scorer, continued getting assists, recording his sixth on the season.

UDM kept pushing. On a counterattack they got deep into Oakland territory and fired a shot into a crowd of Golden Grizzlies. The ball was sent into the crowd, and a whistle was blown. A handball was called on an Oakland defender, and Detroit’s Kyle Bandyk stepped up to the spot to take a penalty kick.

The kick went right, and goalkeeper Sullivan Lauderdale guessed left. The shot hit the bottom right corner, and Detroit tied the game in the 75th minute.

The next 15 minutes were far from slow, as multiple yellow cards and fouls were called. A Detroit midfielder was ejected for a late hit after the ball had already went out of bounds. Reid Sproat and Schrum both got yellow cards as well in the 79th minute.

After multiple failed attempts by both teams to score the game-winner, the game went to overtime. Overtime brought more of the same, as both teams failed to break through the defense and end the game. Other than a save from Lauderdale, there were no significant goal scoring threats in either overtime period.

“It doesn’t matter if a team is 0-10 and the other is 10-0, I can’t remember the last time a Detroit/Oakland game wasn’t close or went to overtime,” Pogue said.

The next home game for the Golden Grizzlies is Wednesday, Oct. 9 at 7 p.m. against Western Michigan University on LGBTQIA+ Pride Night.