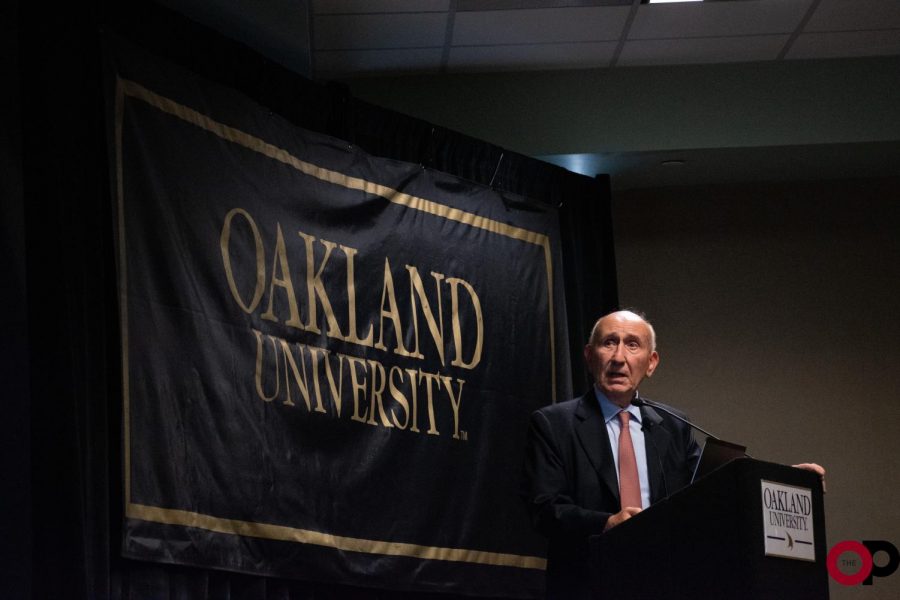 Harvard University professor Evangelos Gragoudas discusses eye tumors and the use of proton beam irradiation therapy on Friday, Sept. 27 in the Oakland Center.

The Gold Rooms of the Oakland Center were filled for cancer treatment pioneer Dr. Evangelos Gragoudas’ visit to Oakland University on Friday, Sept. 27.

Gragoudas, an ophthalmology professor at Harvard University and co-director of the Laser Laboratory and Retina Research Institute at the Massachusetts Eye and Ear Infirmary, is a pioneer in the use of proton beam irradiation therapy (PBT) for eye tumor treatment. Gragoudas began his work at Harvard in the 1970s, and his work has had a profound effect on the way ocular melanoma — a rare but often fatal cancer of the eye — is treated.

“Up until that time, most eyes with melanoma had to be removed in order to save the life of the patient,” Dr. Frank Giblin of the OU eye research institute said. “But with the use of PBT, more than 30,000 patients worldwide have been successfully treated and their eyes saved.”

Aside from the removal of eyes, the radioactive isotope cobalt-60 (Co-60) was used to kill tumors within the eye. The problem with Co-60, however, is that it has the habit of penetrating past the tumor and irradiating much of the healthy eye, blinding the eye. According to Gargoudas, the person who originated the use of Co-60 declared it too risky of a treatment only five years after starting.

Compared to Co-60 irradiation, PBT is a safer and more reliable treatment. Protons are able to be easily directed into a beam, have very little scatter in an object and are able to be used at precise and adjustable energy levels thanks to the Bragg Peak.

The Bragg Peak is a sort of gradual spike, growing slowly but exponentially until a peak is reached where the graph rapidly begins to drop off. In terms of PBT, the line of a Bragg Peak graph is the proton beam while the spike is beam hitting the tumor.

“The beam is extremely accurate,” Gragoudas said, “and next to it, there is no radiation at all.”

Gargoudas and his team tracked over 4,000 PBT patients and recorded the outcomes of their operations. For the 4,000+, the tumor normally stuck around after treatment but regressed within six months.

“Radiation damages the DNA of the [tumor] cells, so the cells cannot make other cells,” Gargoudas said. “But they can stay there for large periods of time … If you look at those cells two, three, four days later they will look exactly the same. But if you follow them for two, three months you can see that gradually the cells die.”

Only about 3% of patients had vision problems (usually resulting from tumors near the macula or optical disc, as well as other factors like diabetes) while only about 9% had to have their eye(s) removed. PBT has also been used to treat cancer in other parts of the body such as the stomach and lungs.

Despite the benefits of PBT, the underlying threat of ocular melanoma remains present. An exact cause is unknown despite the discovery of genetic and lifestyle risk factors, and PBT does not change ocular melanoma’s relentless mortality rate.