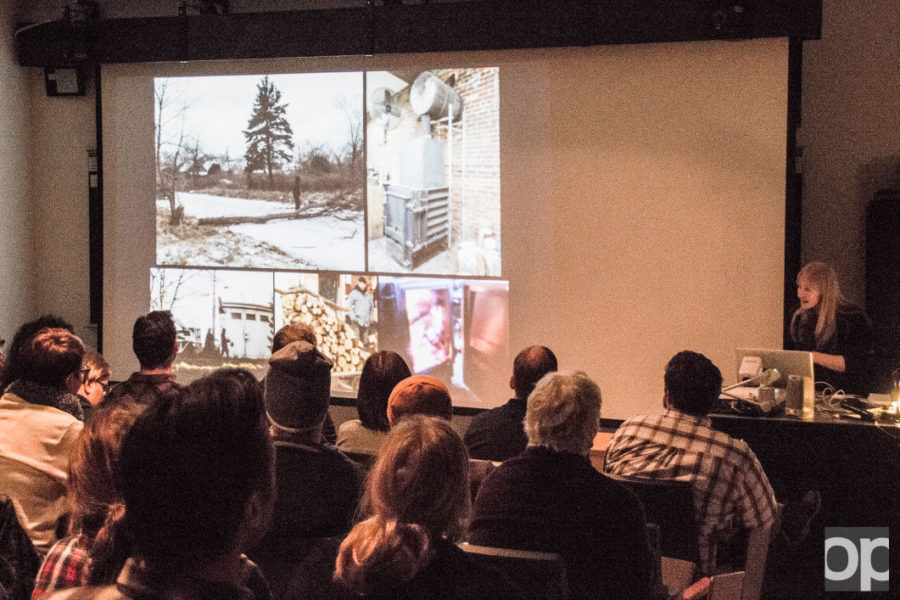 In the far back corner of Wilson Hall sits a cramped lecture room.

On Tuesday, Jan. 27, students filed into room 124 for the adjunct art professors’ presentation of Lightning Talks.

Though you may not be able to tell the difference in the classroom, adjunct professors fill flexible part-time positions at universities, sometimes only teaching one class a semester.

This class will be only one of a multitude of hats that the professor must wear that semester, however. On top of working on outside art projects, which are featured in numerous museums in the area, these professors teach classes at other universities, making their “flexible” schedule tight – a few of them running into Tuesday’s talk a few minutes late.

Each professor, frenzied and enthusiastic, spoke about their most recent projects and inspiration for five-minute increments, hence the ‘lightning’ in the name.

The lights dimmed, the room grew quiet and the first professor, Bruce Charlesworth, headed up to the computer to begin the PowerPoint. Charlesworth showed a video trailer for his interactive installation entitled “Retraction.”

A man of few words at the podium, he let the film speak for itself. We were taken into a strange world composed of ladders; long, connected hallways, decorated in wild colors; solemn telephone calls and impromptu courtyard dance sessions.

After we learned about Miranda Clark’s three weddings (two were in the name of art and, the most recent, in the name of true love, as Clark said, “Whatever that is.”) and John Corbin’s graphic novel about a boy on an island made of Flow Blue China, we were introduced to professor Anthony Paul Olsen.

Olsen, a tattooed sleeve peeking out from his white button-down shirt, donned a skinny, black tie, glasses and wild curls that framed his face and shoulders.

Olsen talked about his BFA in psychology and philosophy and how grad school helped him develop his understanding of his dark paintings, which are mostly influenced by scenes from classic horror films.

“[It] helped me understand the psychology behind why I want to draw monsters and the language to talk about my work,” he said.

From psychological influences and sham weddings to summer art camps, these adjunct professors fill their time with creativity and passion.

As professor Rachel Reynolds said, “I think it is important as an artist to create an audience for art. If students don’t grow up to be artists, maybe they’ll at least grow up to appreciate art.”