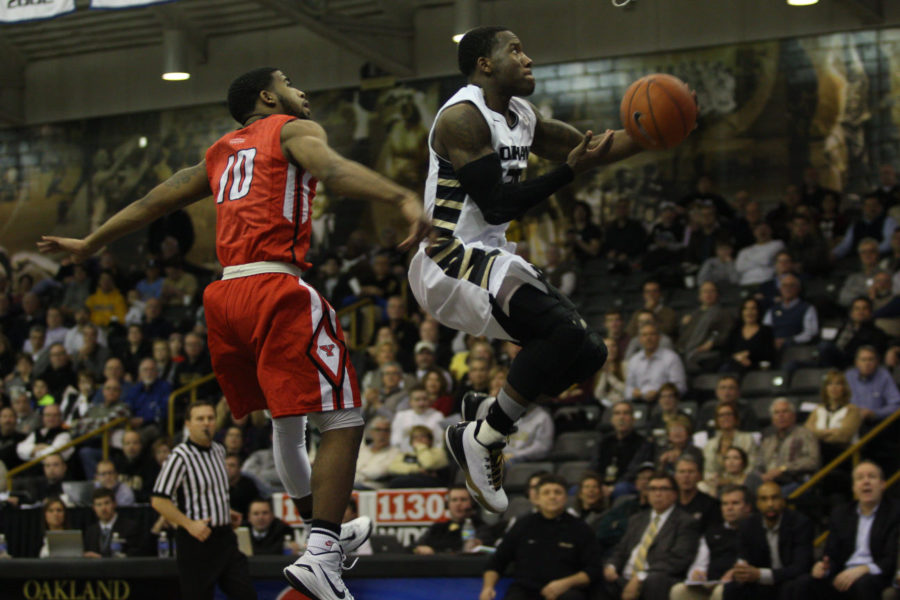 Kahlil Felder goes for the dunk in Wednesday's game against the Youngstown State Penguins in the O'Rena.

Oakland continued to dominate for the month of February, notching another victory Wednesday night over Youngstown State, 82-71, at the O’rena.

In Oakland’s second season since joining the Horizon League, hopes of a conference title remain alive with just one game left in the regular season. The Grizzlies are 11-2 since losing to Detroit Jan. 10 and are 6-2 in February.

Sophomore sensation Kahlil Felder — vying for Horizon League player of the year honors — recorded his fifth double-double of the season with 20 points and 10 rebounds on 7 of 14 shooting. He added five rebounds for good measure.

Freshman forward Jalen Hayes had his second double-double of the season with 16 points and 11 rebounds in just 24 minutes of action.

Senior center Corey Petros finished with 20 points and nine rebounds in what may be his final regular season game on the floor of the O’rena.

Oakland moved into a tie for second in the Horizon League with the victory with Cleveland State sitting at 11-4 in the conference.

League-leader Valparaiso lost Wednesday to Detroit to fall to 12-3 with one game to play — at Cleveland State on Friday night.

If Valparaiso loses Friday and Oakland wins Saturday, Oakland clinches the No. 1 seed and will host the second and third rounds of the Horizon League tournament no matter the outcome of the other games.

A variety of other possible scenarios still exist, but the worst Oakland could finish is fourth in the league.