The case for K: Why Felder’s the Horizon League’s frontrunner 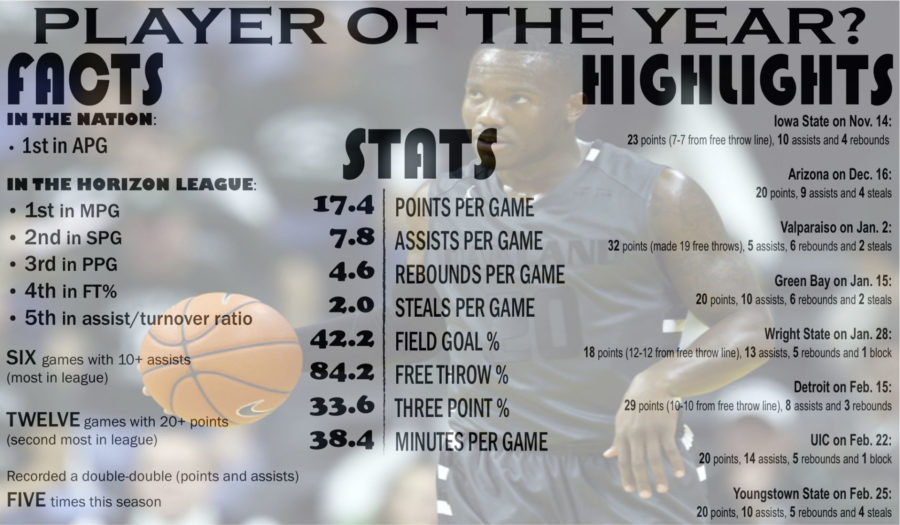 Is Felder the best player in the Horizon League in just his sophomore season?

Kahlil Felder might be the shortest player more often than not when he steps on the basketball court, but what he lacks in height, he makes up for with strength, hustle and most importantly, talent.

That is why he is one of the front runners for Horizon League player of the year.

He is the reigning freshman of the year and has won the honor of player of the week twice this season – first on Jan. 5 after his career-high 32 points led the Grizzlies to a win over Valparaiso, and then on Feb. 2, after Felder led Oakland to three midseason conference wins in one week.

After Oakland’s rough 7-12 start, Felder has helped the Grizzlies turn the season around. The team is 11-2 since Jan. 15 which includes a seven game win streak. Their 11-4 conference record leaves them among the top four teams in the league fighting for first place and a chance to host the Horizon League tournament.

His numbers do not only lead the Horizon League, but also the nation. His 7.8 assists per game and 233 total this season lead all NCAA Division 1 players.

But what makes the play of the 5-foot-9 point guard so special is not something that can be seen in a box score. He brings an intensity and energy to the floor that has fueled the Grizzlies’ efforts in the final minutes of close games this season, like in the win against Valparaiso when he scored 11 points in overtime. Valparaiso only scored four.

This clip of his dunk before the game against University of Detroit-Mercy on Feb. 15 has thousands of loops on Vine, and after the win against Youngstown State on Feb. 25, Felder’s crossover that sent Bobby Hain to the floor was the number one play on SportsCenter’s top ten.

Keep in mind, Felder in only a sophomore.

As the end of the regular season approaches, the player of the year debate has swayed in Felder’s direction.

Reigning Horizon player of the year Keifer Sykes has cooled off in the month of February. Alec Peters is the only other player with a chance, and his claim to fame is only be that he’s the best player on the best team in the conference.

The facts, statistics and highlights make it difficult for anybody to say Felder is not deserving of such an honor.

Felder, always humble, has told reporters that his only goal is to help his team make the NCAA tournament.