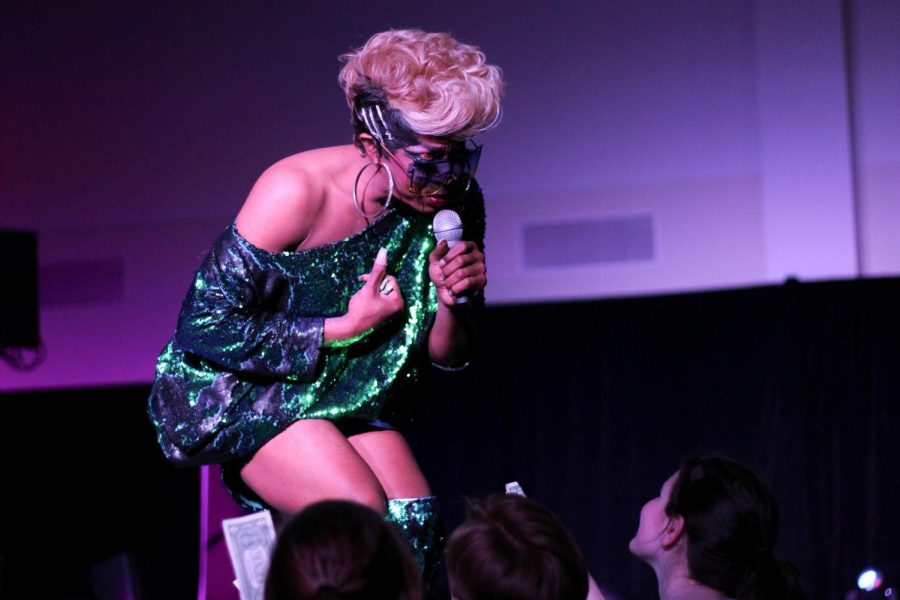 Hershae Chocolatae has been the MC for the annual Drag Show for many years.

Flashing lights, hundreds of people and drag queens and kings performing their hearts out. All was there during the 16th annual Drag Show on the last night of Oakland University Pride Month.

OU Pride Month, lasting from March 12 to April 11 this year, was a series of events and celebrations celebrating the LGBTQIA+ community and what they have accomplished. The Drag Show was the last event and a send-off.

Not only does the show give people from the LGBTQ+ community a chance to show their pride, but it also gives allies and others a chance to get fully immersed in the culture.

Mickey McGlinnen, president of the Gay Straight Alliance (GSA), said the planning for the next year’s Drag Show starts as the last year’s ends. Choosing a new e-board also coincides with the startup of new Drag Show plans. This year, the new e-board was announced at the show.

The planning is mostly done by the GSA e-board, but GSA members are involved as well. The decorations on the welcome board that night, including a depiction of Handsome Squidward from “SpongeBob SquarePants” and various other sea creatures, were all made by the members.

McGlinnen said drag shows are something both people from the LGBTQ+ community and others outside it can enjoy. They said people who are interested in the community can take their “first steps” into it with a drag show.

“Having something very up-tempo and fun and entertaining makes it a very not risky way to get into the LGBTQ+ community and our events,” McGlinnen said. “It’s a fun event, it’s not like an activism event where people might feel more pressured.”

The drag queens this year included Hershae Chocolatae and Sabin, both of of whom have been coming to OU’s Drag Show for a long time. OU students also made up some of the drag kings, such as the group 99 Degrees.

GSA Vice President Dallas LaCross or “Diego Sugar Land” was part of the 99 Degrees performance. She said the end of each Drag Show leaves her feeling relieved, tired, satisfied and rewarded for everyone’s hard work.

LaCross said the show is a way to educate people on gender and help them get a glimpse of the culture.

“For so many people, they’ve never been exposed to that kind of culture and what it means to be anywhere near a drag show,” LaCross said. “And bringing it here, it expands the demographic a lot.”

Eli LaFond, a member of the GSA and future treasurer, said they were excited to have a good time without worrying about anything. They also said the drag shows give people the freedom to be themselves.

“I think it gives everybody a freedom to express themselves in any way they want to in makeup, hair, clothing, artistic ability, dancing and music choice,” LaFond said. “Artistic stuff is really important to the LGBTQ+ community, and so something like drag shows are just so much fun.”

Hershae Chocolatae ended the night by reintroducing the cast and reminding OU students how lucky they are to have such an open campus.

Students interested in joining the GSA can attend weekly meetings Thursdays from noon-1 p.m. in the Oakland Center Lake Michigan room and visit the organization’s Facebook page for more information.