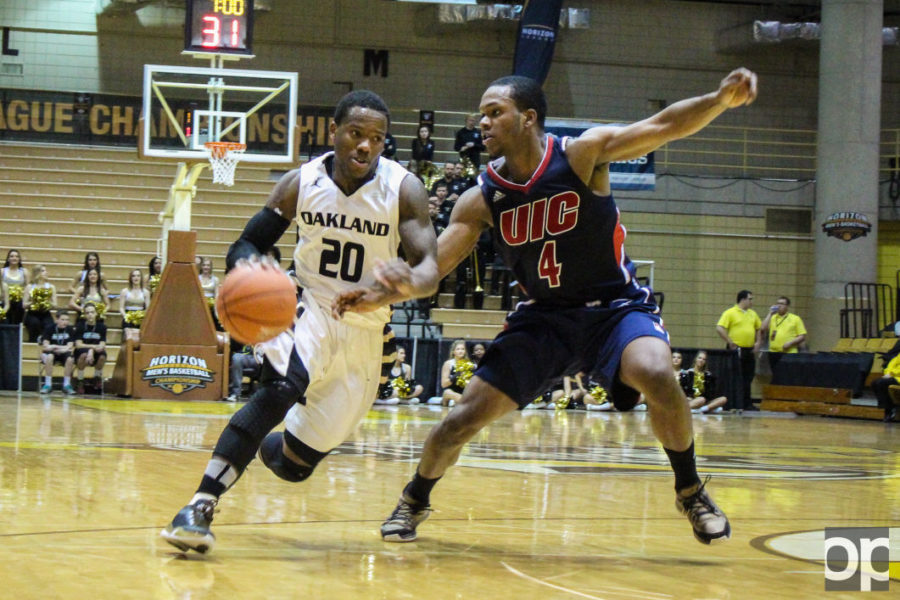 The Oakland men’s basketball team’s hopes for a Horizon League tournament championship and NCAA tournament bid diminished on Friday, March 6 after UIC defeated the Grizzlies 72-69 in the quarterfinals.

With Horizon League regular season and tournament play over, here were the best moments of the Golden Grizzlies’ season.

Following a road loss against rival school University of Detroit-Mercy, Oakland responded in a huge way with a seven-game win streak.

The streak served as a turning point in the season after Oakland started with a rough 7-12 record. The Grizzlies finished the season going 11-3, which started with the seven consecutive wins.

During that stretch, they defeated opponents by an average of 10 points per game and six of the seven victories were against Horizon League teams.

The Grizzlies got their revenge on the Titans with an 83-78 victory on their home court on Saturday, Feb. 15.

4,101 fans attended the game, setting a record for attendance in the O’rena.

The Titans battled to erase an early Oakland lead, but Kahlil Felder took over the game in the second half to secure the win for Oakland.

Felder scored 29 points and Nick Daniels followed his efforts with 14.

An anonymous source said the win was almost as great as Coach Greg Kampe’s celebratory dancing in the locker room afterward.

In only its second season as a member of the Horizon League, the Grizzlies went undefeated in league play on their home court.

Last season, the men posted a 4-4 record at home.

If a list of the jaw-dropping moments involving the starting point guard this season were to be made, it would be much longer than just five.

Whether it was Felder’s monstrous dunk against Green Bay, career-high 14 assists in the 81-56 victory against UIC, career-high 32 points in the 89-75 victory against No. 1 seed Valparaiso, pregame dunk that made everyone forget about Zach LaVine a day after the dunk contest, or crossover against Youngstown State that made the number one play on SportCenter’s Top 10, the sophomore never failed to excite his teammates and fans.

Felder made the all-league first team and was a candidate for player of the year.

Number one: Finishing third in the Horizon League

It might not seem like that big of an accomplishment to someone who is not a follower of Oakland basketball or the Horizon League, but finishing third after being projected to finish seventh in the preseason poll proved those who underestimated the Grizzlies wrong.

The men ended up finishing third after the race for first place in the conference and top seed in the Horizon League tournament came down to the last week of action.

Maybe this does not have much to do with what Oakland achieved this season, but having arguably the greatest basketball player in the world sit court side at a home game with his teammate J.R. Smith was a pretty special and surreal moment.