Andy Meisner speaks to the College Democrats at OU 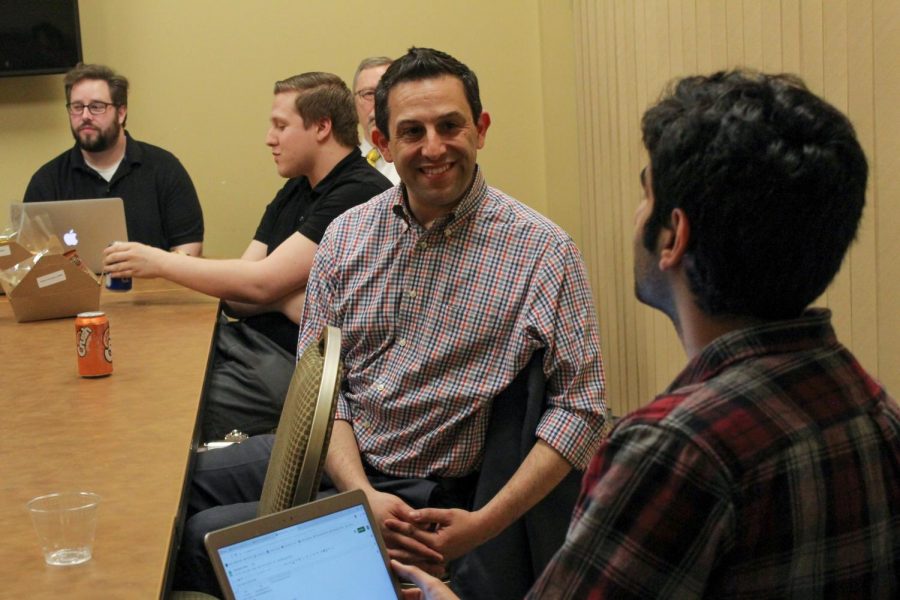 In an event hosted by the College Democrats at Oakland University, Oakland County Treasurer Andy Meisner spoke to a small group of students on Monday, April 8.

The event was hosted in Room 128 of the Oakland Center, and students in attendance were able to engage in a conversation with Meisner about his career in politics and his interest in running for Oakland County Executive.

“A lot of really good people dismiss themselves from running for office because of things they’ve done in the past,” Meisner said. “They think that they could’ve never had a drink. The first thing to ask yourself is ‘What is your purpose?’”

Meisner is a Ferndale native and has been politically active since 2002 when he was elected to the Michigan House of Representatives. Despite attending law school and passing the bar exam, he felt drawn to politics.

“I think that helping people is my purpose in life,” Meisner said. “I don’t think you should get into politics if you’re hoping that people are going to kiss your ring. That should be a red flag.”

The College Democrats at OU hopes that events like this talk will help to enlighten and educate the OU community on political issues.

“The CDOU had essentially dissolved as a student organization about a year prior to this current executive board’s involvement,” said Chase Lindenthal, president of CDOU. “We wanted to restart the College Democrats because we knew there was no other outlet for like-minded folks to come together and express their opinions on the political issues of the day. My involvement extends to the founding of the organization.”

During the event, Meisner had advice for students interested in careers in politics.

“One of the most important things you can do in fundraising is to put a specific dollar amount on the table,” Meisner said. “By giving them a specific number, you make it easy for them.”

CDOU invited Meisner to speak in order to raise students’ awareness about local government in Michigan.

“This event with Treasurer Meisner gives students the opportunity to engage with an important local leader who can give immense insight into the way Oakland County operates,” Lindenthal said. “This event also allows the campus community to hear firsthand what Meisner has planned for the future.”

Meisner hopes to make an impact on homelessness in Oakland County while he’s in office. By 2025, he hopes to have eliminated the issue of child homelessness.

A primary goal of both Meisner and CDOU is getting students involved and educated in politics.

“Everyone deserves a personalized invitation to participate in the democracy,” Meisner said.

CDOU host regular meetings that are open to all OU students. More information can be found on the College Democrats of OU GrizzOrgs page or by emailing Chase Lindenthal at [email protected]

“Civil interaction with each other is essential to the survival of our society,” Lindenthal said. “I feel it is important to have groups like the College Democrats on campus because we help open the door for students to engage with each other and elected officials.”