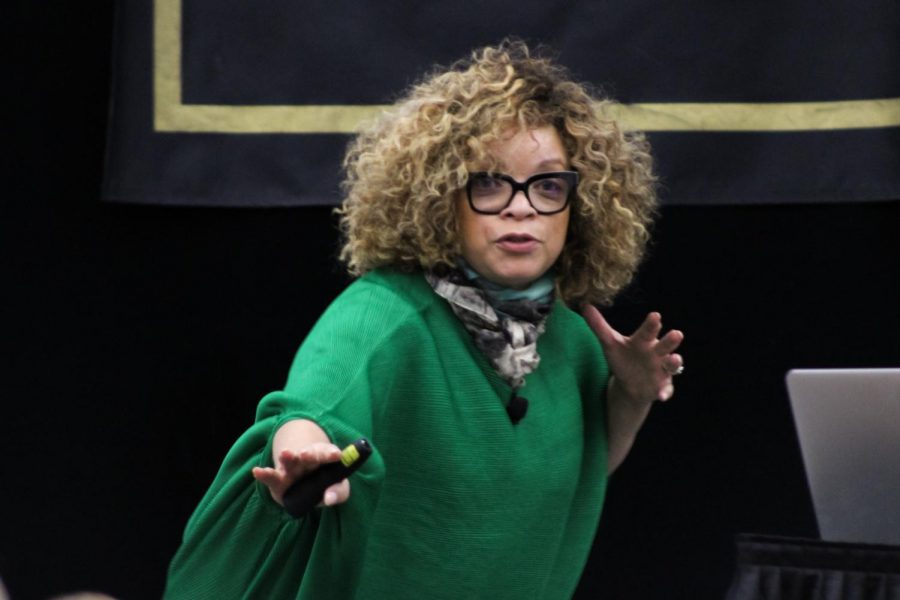 The Oakland University community was treated to a night in Wakanda on Wednesday, April 3 when “Black Panther” costume designer Ruth E. Carter came to campus.

Carter’s visit came in the wake of her history-making Oscar win earlier this year for her work on “Black Panther,” where she became the first black woman to receive the award for Best Costume Design.

And while Carter acknowledged the importance of her Oscar win, it was far from the focal point of her 90-minute talk.

Rather than discussing the film’s critical or commercial honors, Carter focused on its African roots and how that contributed to its cultural success.

“We have to retrain our eyes to accept the beauty in others, in other tribes, in other things that we don’t necessarily know or recognize,” she said. “That was our intent.”

To prepare for the approximately 700 costumes she would ultimately design for the film, Carter immersed herself in extensive research on African culture, which provided inspiration for the film’s five Wakandan tribes.

Much of her process involved modernizing traditional African wardrobe to emphasize Wakanda’s status as a “forward-thinking nation” while keeping it grounded in African roots. One of the ways in which she maintained this balance was by updating the titular character’s suit from its appearance in “Captain America: Civil War.” Carter developed an “Okavango” triangle pattern on the Black Panther suit, which paid homage to the sacred geometry of Africa.

“It was an incredible opportunity and honor to take traditional costumes from Africa and infuse it in a superhero model,” Carter said.

Upon release, “Black Panther” was praised for advancing minority representation in film. Particular acclaim went toward the Dora Milaje, the female bodyguards that protect the film’s protagonist, T’Challa (Chadwick Boseman).

Carter expressed concern over the sexualization of female characters in the original “Black Panther” comics, which she argued were made “for men and boys.” Because of this, “honoring the female form” became a priority for both Carter and director Ryan Coogler during the film’s production.

In doing so, Carter hoped young female viewers would feel empowered by “Black Panther’s” female protagonists and their ability to be strong and beautiful without exposing themselves.

“I think we’re ready for women to lead,” she said. “I think continually seeing the same images of someone of the ‘weaker sex’ is a little bit out of date, and I think that’s why it was important that we push women forward into the foreground.”

In spite of her optimism on stage, Carter said she experienced difficult moments during the production of “Black Panther.” Occasional wardrobe malfunctions warranted makeshift costume designs on Carter’s part, including a headdress designed from a Pier 1 Imports placemat and a fur cape that attached to actor Winston Duke via refrigerator magnets.

But perhaps even more challenging was working with a crew of individuals with experience on previous superhero films, only for the entire team to quit halfway through pre-production.

“I suddenly was faced with my experienced half moving on, and I’m completely disarmed,” she said.

Having never worked on a superhero film before — or one on “Black Panther’s” scale, for that matter — Carter initially felt overwhelmed. But she ultimately found strength in the realization that artistic ability outranks experience.

Looking forward, Carter explained how “Black Panther” is significant in continuing conversations about embracing culture. She said the film contributes to the afrofuturism movement, an art form that intersects science-fictional elements with those of black history and culture.

“It’s the opportunity to project or to show, in a futuristic model, something that is based on culture,” she said. “It doesn’t necessarily mean that it’s African culture… It just means you take your culture and you reimagine it in a futuristic way.”