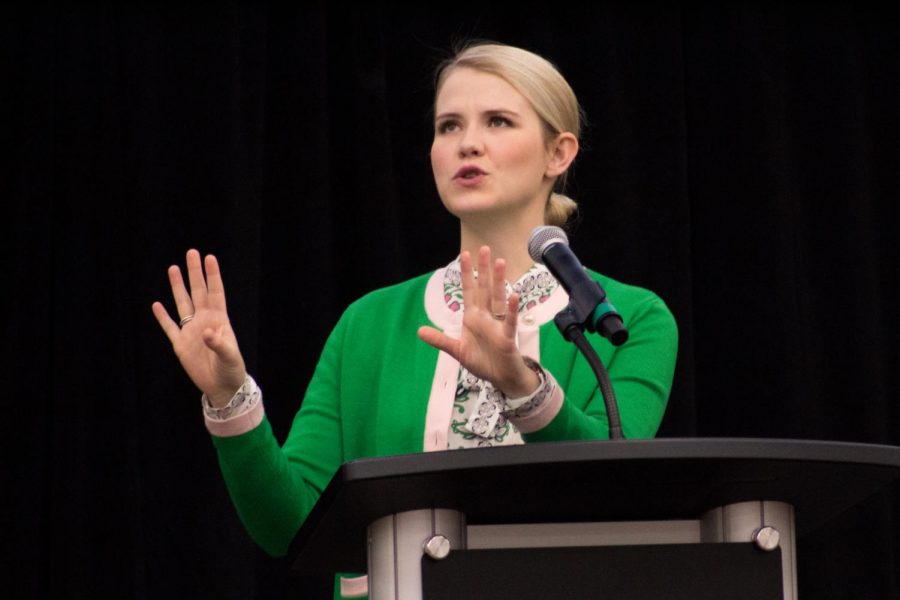 The worries of most teens consist of school dances and pep rallies. For Elizabeth Smart, at the age of 14, these worries were replaced with one word: survival.

On June 5, 2002, Elizabeth Smart was kidnapped from her bed at knife point, her younger sister laying silently beside her. The knife pressed against her bookmarked the beginning of what would be a traumatic nine months.

Smart spoke at Oakland University on Wednesday, March 21 in Ballroom A of the Oakland Center to an audience of 800 people. Her story, though graphic in detail, highlights her strength, faith and wisdom.

“As we walked down a path, I remember looking up at the man who had kidnapped me and begging him: if you’re going to kill me, please do it here,” Smart said. “He simply smiled at me and informed me that he wasn’t going to kill me, yet.”

For nine months, Smart was held in a tent, tied to a tree, starved and raped by her captors. They forced her to wear a veil in public, and repeatedly threatened to kill her and her entire family if she told anyone who she was.

“I had no reason not to believe they’d kill me,” Smart said. “They’d done every other horrible thing to me.”

Her family never gave up on the hope of finding their daughter, and in the end, it was that same hope that brought her home.

“A police officer stopped us and eventually pulled me to the side,” Smart said. “‘There’s a girl who’s been missing for a long time and her family has never given up on finding her,’ [he said]. ‘They want her to come home more than anything in this world. Wouldn’t you like to come home now?’ It was in that moment that I felt safe.”

It took eight years for Elizabeth Smart’s case to go to trial. Brian David Micheal, the man who kidnapped her was sentenced to life in prison without parole. His wife, Wanda Barzee, who assisted in the rape and abuse of Smart, was sentenced to 15 years. She was released from prison in September 2018.

Throughout her talk, Smart only referred to Michael and Barzee as her captors.

“The trial is what originally prompted me to speak out. During those eight years I had hoped to keep the details of what happened to me to myself,” Smart said. “During the trial, so much came out as a simple list of bullet points. I decided that if it was all going to come out, it should be on my terms.”

Smart now speaks frequently around the United States about her trauma and how she has overcome it.

During the question and answer portion of her talk, she elaborated on topics like victim shaming.

“Never start a question with the words why didn’t you, because a survivor will not hear your curiosity. They will hear the words ‘why didn’t you?’” Smart said. “Ultimately, they did their job. They survived.”

Smart has written two books “My Story” and “Where There’s Hope: Healing, Moving Forward, and Never Giving Up.”

In both books, she details how she was able to find happiness after her traumatic kidnapping.

“I have forgiven my captors, but for me that forgiveness was solely for myself.” Smart said. “I never want to see them again, I want nothing to do with them, but I will not let that anger take up a percentage of who I am.”

Throughout her journey toward healing, Smart was reminded of a lesson that her mother shared with her on the day she was rescued.

“These people stole nine months of my life from me,” she said. “I didn’t know when justice would be fully served, but the greatest punishment I could give these people is to be happy and move forward.”