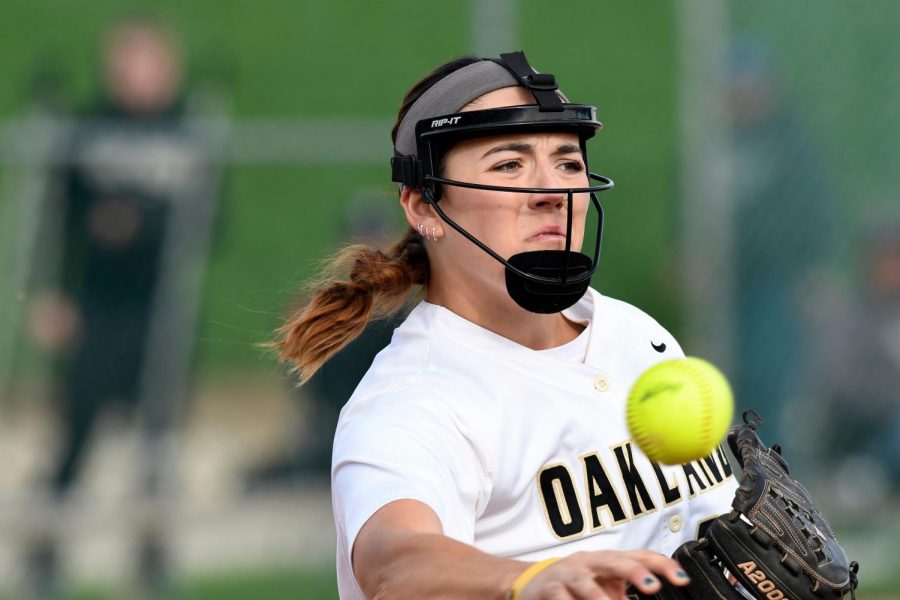 Senior Brittney Miller is attempting to end her final year of softball with a bang.

Miller started her sporting career playing baseball when she was only three years old. She made the switch to softball not too long after, and has been loving the sport ever since.

“After I turned eight, I switched to softball,” Miller said. “I played one year of rec ball then went straight to travel fast pitch, and I loved it. I played all throughout middle and high school and continued to appreciate the sport. I remember watching girls on TV play, and I always wanted to be as good as them. Once I found out that you can get scholarships for playing, I went to as many camps as I could and worked as hard as possible to get to where I am now.”

Miller got her start playing when she was a freshman at Oakland University. Since 2016, Miller has started in more than 40 games every season. She believes that finding consistencies elevates the way her and the team play overall.

“Being a part of this team since I was a freshman has been a crazy, unpredictable journey,” Miller said. “However, I think that my goal has stayed the same throughout every year and that’s just to get better. The team and I strive to be better everyday. If we come up short, we continue to stay motivated and continue to move forward no matter what. We all know that finding that consistency in our play is one of our key focuses, so if we can figure that out every time we meet then we’re doing what we need to do.”

Come game day, Miller and the softball squad always try to win but also to go out on the field and enjoy themselves. As a senior, Miller doesn’t feel that she sets the expectation for anyone other than herself and just wants her team to play to the best of their abilities.

“I don’t feel any pressure because I’m a senior, if anything, there’s pressure to perform because we just want to win,” Miller said. “We don’t have any set captains or leaders on the team so we just go out there, have fun, and play the game to the best of our abilities. I never get the feeling of setting the standard or expectation for anyone other than myself.”

Miller does not plan to play softball outside of college. However, as she ventures into her new chapter of life, she had very encouraging words for the team and players that will follow.

“The best advice I have is to really indulge yourself in every moment you play,” she said. “It truly goes by fast, and before you know it you’ll be a senior like me trying to plan out your future. There will be times when you don’t feel like going to practice, you feel like giving up or just feel that your body can’t take it anymore. However, the payoff is so worth it, you will meet long lasting friends and really figure out who you are as a person. So hang in there and you won’t regret it, I promise.”

Miller and the rest of the softball team will be on the road traveling to Youngstown, Ohio to face off against the Youngstown State University Penguins for their first Horizon League game of the season. The competition is March 22-23, starting at 3 p.m. on Friday.