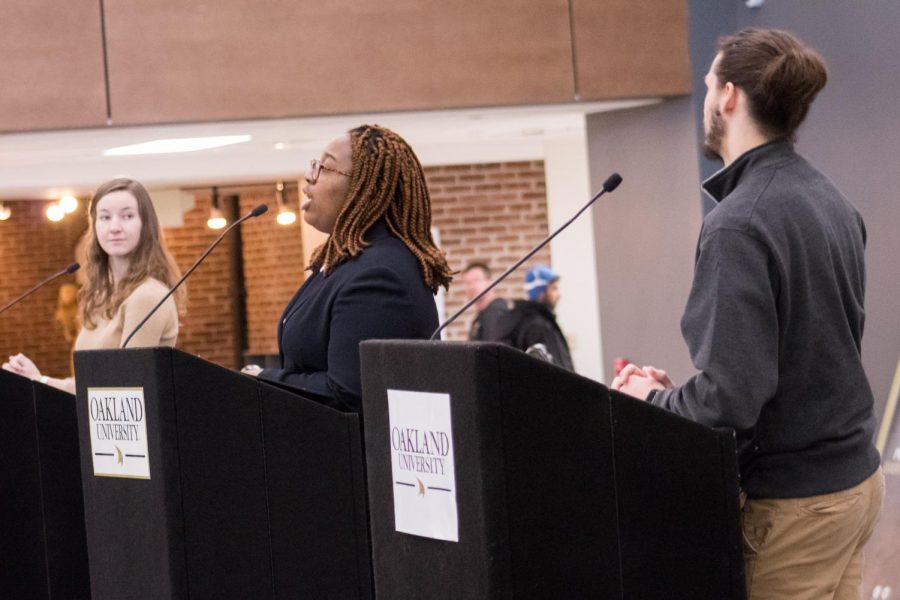 As spring finally rolls in, a cause for excitement and alert does as well.

From March 20-27, students will choose who will represent them as Oakland University Student Congress (OUSC) president. Presidential candidates Destinee Rule, Mackenzie Hill and Joshua Robinson took turns speaking about their campaigns and the future of Oakland University at the presidential debate on March 13.

Discussion topics included privacy for transgender students, more accessibility to buildings, and how the candidates would go about addressing issues with the administration.

Rule’s platform consists of creating diversity in the university, making programs that can be applicable to all students and having the most resources for students. She said she wants students to feel comfortable on campus and in the OUSC office.

Rule wants to improve housing for transgender students; however, she doesn’t want to pry too much into their privacy either. The most difficult part of the OUSC for Rule is changing its culture to include more students and offer more resources, but she said her role as equal to the students she represents will help her address student issues.

“Julia [her VP running mate] and I pride ourselves off the fact that we’re your every day student,” Rule said. “We work together and figure it out, and we do it well. We’re the people on campus who have been advocating for students.”

Communication is one of the main points of Hill’s campaign. She said she relies on her vice presidential candidate, Owen Bennett, when she finds herself overbooked or working a lot of hours.

“I do believe in the efficiency, the representation and communication aspects of our platform,” Hill said. “We’ve had a lot of changes in my position, and I’m really excited to have a lot more to do.”

Robinson’s campaign is based on helping represent students. He said he believes having trust in the team he will lead is the best way to get things done. The one issue Robinson said he would focus on if limited to one thing is the parking situation, specifically switching where the overnight spaces are, so parking is more organized.

Robinson also highlights communication, spirit and hearing the voices of students from both sides of any conflict. He said he wants to have more involvement in the OUSC office and help more students be connected to the office itself.

“We believe in students, we believe in what they’re doing,” Robinson said. “We want to foster that and we want to make it as large as we can and as known as we can.”