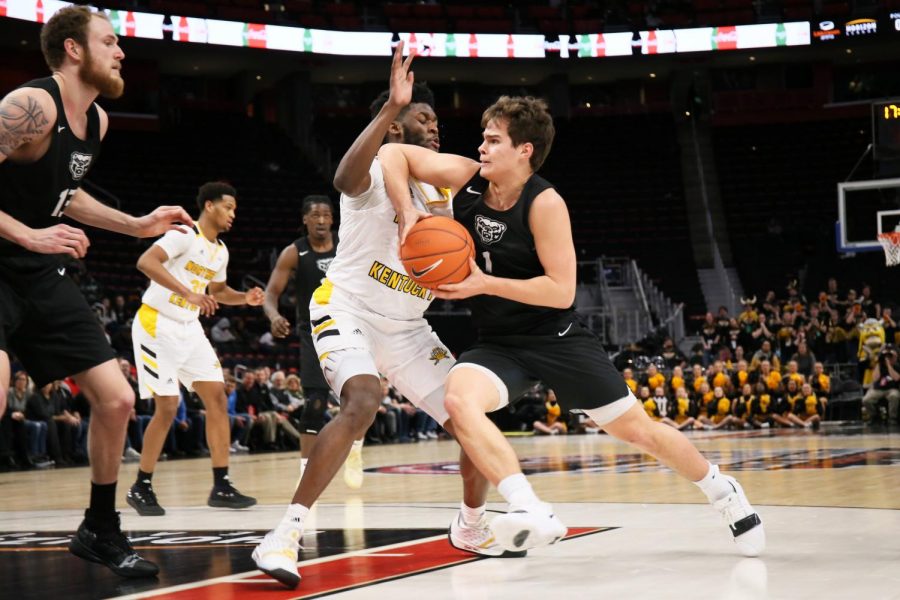 The Golden Grizzlies were caught in the midst of one of the most quirky and twisty games that ended with a game-winning dagger for Northern Kentucky University. For Oakland fans, it was nothing but heartbreak, but there is plenty to take away from the season and from this game.

The action picked up in the last four minutes of the game. Oakland was down 11, but came back from behind and took the lead by two points. However, the Golden Grizzlies’ defense missed the switch, leaving NKU’s Drew McDonald wide open and allowed him to hit the game-winning three. Head Coach Greg Kampe emphasized in their last timeout to not let NKU take a three at any cost, and they left the Horizon League Player of the Year open.

Guard Jaevin Cumberland was the star of the game for Oakland finishing with 27 points going 7-14 from beyond the arc. Cumberland was fearless the whole game, with his killer demeanor he helped claw the team back in the game with two threes down the stretch to get Oakland within five points with two minutes left.

From there, Tray Maddox nailed a three and had a gritty grab, and put back to tie the game with under one minute left. With 10 seconds left in the game, Cumberland was at the free throw line, he hit both without flinching to put Oakland up two. After that, it was that deja vu moment for Oakland.

McDonald was left open and the player of the year drained an open 3-pointer with 1.6 seconds remaining. With no timeouts, Braden Norris had to heave up a three that ended up in the student section.

“Obviously it’s disappointing,” Xavier Hill-Mais said. “Our guys fought back really hard, but he threw in that last second shot. Obviously we’re disappointed, there’s not much to say.”

Oakland has ended their last four seasons in the Horizon League Tournament on three game-winning shots from the opponents and one missed winning shot on their behalf. It’s hard to swallow, but that’s why they call it march madness. The game isn’t truly lost on that one last play, it’s a 40 minute game.

Looking back on the season, the consensus from the media was Oakland was going to be lackluster. Kampe came in with an almost entirely new team, and the team of “misfits” blossomed into something special. Players like first team all-freshman Norris stepped up when their number was called, Norris was thrown into the starting line up after former starting point guard Brailen Neely transferred, and he became a top freshman in the conference.

Hill-Mais is another key piece on the team who made leaps and bounds from his past seasons. Hill-Mais was named to the All-Horizon League Team, he averaged 18.5 points per game this season. Although, on the big stage tonight his presence wasn’t felt nearly as much as it needed to be, at times he was overshadowed by the height of the NKU big men. Hill-Mais was 4-12 from the field, he missed routine shots he had made all year and he felt the pressure under the bright lights of Little Caesars Arena.

Considering the whole team should be returning next year, Oakland will be looked at as the front runner for the Horizon League in 2020. Cumberland, Hill-Mais and Brad Brechting will enter their senior years.

“The program is always good, it always has been and it always will be,” said Kampe. “The basketball gods haven’t been good to us in Detroit (in the Horizon League Tournament).”