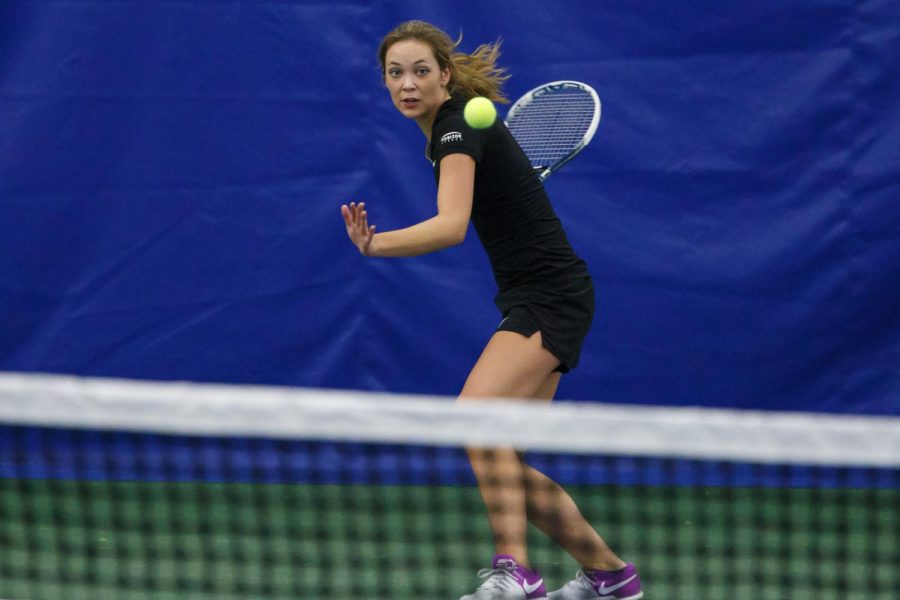 Alexandra Whall of the women’s tennis team at Oakland University focuses on both the court as well as the classroom.

Whall started playing tennis when she was 4-years-old, and she never stopped. Once she turned 10, she started playing year-round, traveling and participating in many tournaments. In high school she was a four-time all-state, all-league and all-county selection as well as being a state finalist in doubles in 2013.

She is one of the team captains of this year’s tennis team, but is no stranger to being a leader. In her senior year of high school she was chosen to be the captain of the team. Whall says there is pressure in being a team captain, but keeping a positive mindset and attitude helps her and the team do well when they’re on the court.

“Yeah, there’s always a little more added pressure than usual,” Whall said. “You have to set a good example, most times the best way to do that is to perform well and always keep a good attitude. That can be really hard sometimes especially when you’re having an off day, but I just try to keep going and keep a positive attitude because it affects the team a lot better overall.”

Whall, an accounting major, prides herself in her academics and the way she performs in the classroom. In the 2017-2018 season she was named to the Horizon League’s All-Academic Team for her efforts in class.

“It really meant a lot to me,” She said. “I work really hard on my academics. I’m an accounting major and it’s not always easy to keep up with traveling and school work. Finding out though was a really huge deal for me especially since I believe they only name one student per team, on top of that I was a sophomore as well so just being a part of that was really nice.”

As part of the All-Academic team, Whall believes academics do play a pivotal role in how athletes perform when its game time.

“I do believe those two factors have some correlation,” Whall said. “For some people more than others of course, it really depends on how involved you are. For me personally, if I’m not doing well in a class I talk to my coach, my academic advisor to make sure I get all the help that I need in order to do well. I know that if I got a bad grade on a test or a project it’ll linger in the back of my mind and make me frustrated and ruin my performance.”

As Whall finishes off her junior year, and soon become a senior, she wanted to leave some advice and a few words of encouragement for all athletes who come after her.

“Definitely enjoy the opportunity you have,” Whall said. “Keep a positive attitude about everything, it is very rare and is not something that everyone gets to have or experience. So enjoy everyday like it’s your last and play the sport to the best of your ability.”

The tennis team will be traveling to Muncie, IN for a battle with Ball State University on Saturday, Mar. 2 at 1 p.m.