Senior wins Up to Us essay contest 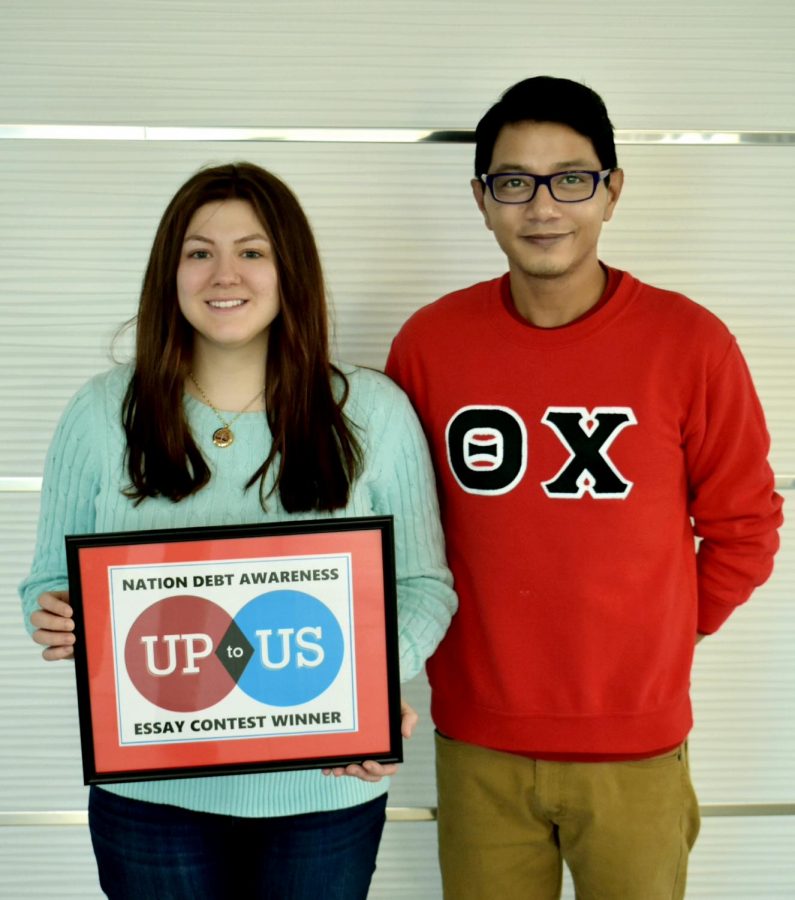 Essay winner Tia Falzarano with Oakland Up to Us Executive Director, Joseph Javier.

Up to Us at Oakland University held its national debt essay contest last semester. Senior Tia Falzarano won the $100 first place prize for her entry.

“I saw advertisements on Facebook for the contest. Working on this essay gave me information on the national debt that I never would’ve looked for otherwise,” Falzarano said.

Up to Us is a national campaign that began in 2012. It focuses on engaging the younger generation in fiscal involvement and education. Their campus competition encourages students to form Up to Us groups and spread information about America’s national debt.

In November of 2018, members of the Oakland University Theta Chi fraternity joined the competition. They declared November as “National Debt Awareness Month.”

America’s national debt will reach an estimated $22.7 trillion by the end of 2019. Up to Us believes that millennials need to address the debt head on because it will have the greatest impact on their generation.

“I think this organization is important because it targets a younger audience,” said Falzarano. “As older generations do not have to worry as much about the national debt, my generation is stuck with that burden.”

Falzarano is an environmental science major and will be graduating this summer. Her essay highlighted her personal experiences with the effects of America’s debt.

“My grandma and the elderly patients that I work with tend to fall into a thing called ‘the donut hole’,” said Falzarano. “The donut hole typically occurs at the end of the year where insurances and social security only covers medication cost for a certain amount of time during the year.”

The essay she wrote also detailed the ways that Up to Us and their essay competition helped her learn about the national debt and how she can make a change.

“I knew a little bit about the debt before writing m essay. I knew that social security will most likely not be available to my generation,” Falazarano said.

Up to Us encourages students to spread information about the economy to their classmates. This includes the circulation of pledges around college campuses. Currently, over 90,000 people have signed the Up to Us pledge.

“Tia’s personal story will give a voice that other young people who share her concerns can relate to,” said Joseph Javier, OU’s Up to Us executive director.

The pledge can be found on the Up to Us website and states that “by signing this pledge, I am joining the tens of thousands of my peers who have supported Up to Us to communicate that securing our fiscal future is an important priority for America’s next generation.”

The essay contest and pledge signing are just a few ways students can get involved with Up to Us. For more information on the groups spring events and ways to participate, OU students can visit Up to Us at OU’s webpage.

“I feel that more people should be exposed to solutions and ways of preventing the burdens that come along with our national debt,” Falzarano said. “I felt saddened while I was doing my research because I found that it’s more of an issue than people realize”