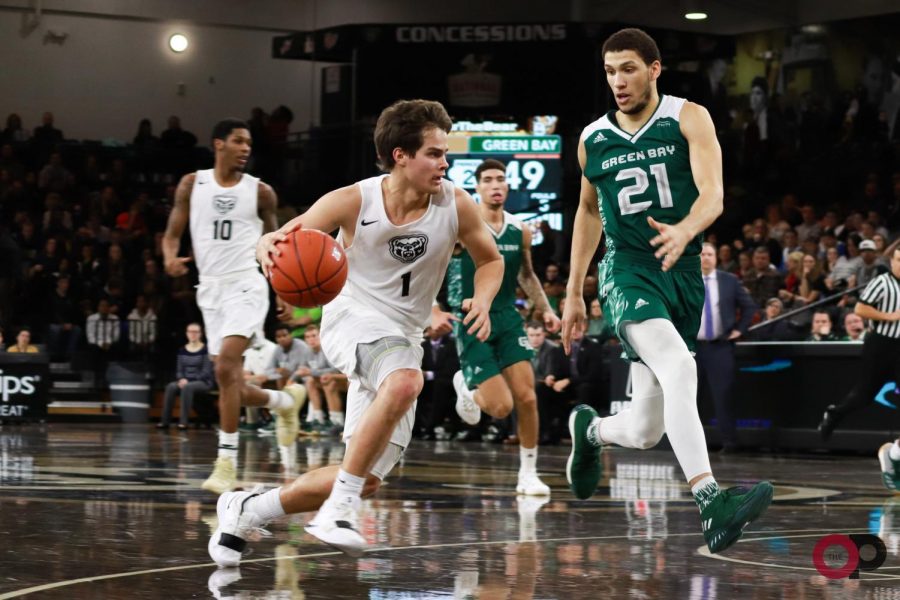 Karmari Newman shines off the bench as Oakland University glides by the University of Wisconsin-Green Bay Phoenix.

Oakland entered the game off of tough back-to-back losses against inter conference foes, but they came back on Saturday, Jan. 12, completely redeeming themselves. They won 90-78 on the back of guard Newman who had a career-high 33 points.

Throughout the first half, you could feel the mood that Oakland needed and wanted a win. Head Coach Greg Kampe was irritable, yelling and slamming anything he had in his hand when the players or officials made critical errors.

“I need to take a nap because that’s the most active I’ve been on a sideline since back in the day,” Kampe said after the game. “A person who had not seen Oakland play would think I’m nuts.”

Forward Xavier Hill-Mais, leading scorer for the team for the season, quickly scored four points and then checked out in the first couple of minutes for forward James Beck because he was battling an illness. It worked out though as Oakland rode the hot line up until about seven minutes left in the half when Hill-Mais checked back with the Golden Grizzlies being down only two points.

Newman came off the bench and made a massive impact in the first half, scoring a clean 11 points on three field goal attempts in the first half. Jaevin Cumberland also put up a big chunk in the first half with 10 points. As the half came to an end, guard Braden Norris heaved a shot from three-quarter court that nearly went in as it clanked off the backboard. The deficit never surpassed double digits for either team as the halftime score closed 39-41, Green Bay’s lead.

The second half remained close to start as both continued to trade blows. With about 17 minutes left Cumberland had a three-point shot taken off the board which caused a little bit of a stir up with the crowd. Newman stayed on absolute fire through the half adding an extra 22 points with 10-13 shooting from the field and 6-8 from deep.

Oakland really started to pull away in the last 10 minutes of the game with shot after shot. The defensive effort could not be understated in the second half they held Green to a 36 percent field goal percentage. As the game closed Green Bay continued their full-court press keeping the pressure on Oakland, but ultimately it wasn’t enough to keep the game competitive.

“It was the first time ever I had a team that has never played together [coming into the season]… and we burst onto the league scene with three wins and the last three days have been hell.” Kampe said. “This was a who are you game, this had nothing to do with our fan base, nothing to do with anyone outside our circle… It was a huge win and a hell of a win for us.”

“Preparation, I’ve gotten a lot of shots up the past couple of the days,” Newman said about what went into this game, “and what coach Kampe said about this game, he challenged us.”

Next week the team will be taking on their in-state and inter conference rivals, University of Detroit-Mercy right down I-75 in Detroit. Kampe has set the bar high for this game, expecting a full house.

“I hope the game is won on a last-second shot by a guy in black,” Kampe said.