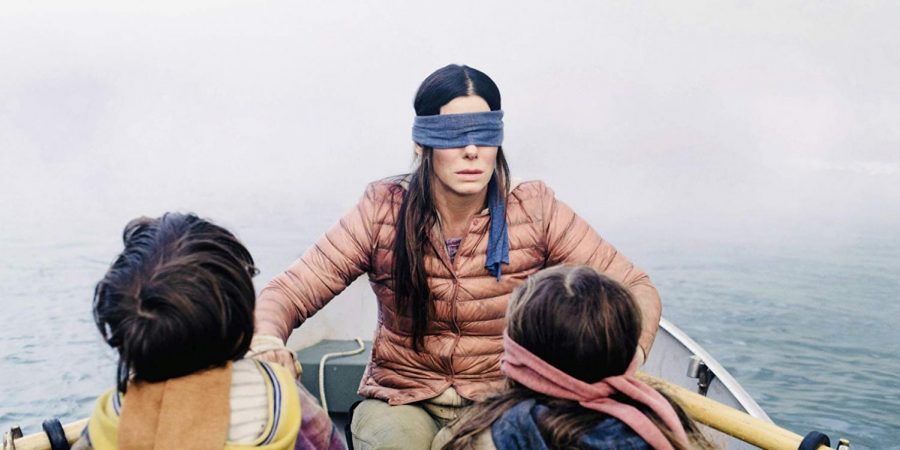 There’s something about death that apparently makes a good selling point for movies. Theatergoers — and now, streaming service subscribers — have an inexplicable emotional attachment to the prospect of death in films.

Netflix evidently caught onto this and combined it with people’s far more understandable love for Sandra Bullock into one of the most peculiar post-apocalyptic films I’ve yet to watch — “Bird Box.”

Directed by Susanne Bier, the riveting-yet-messy film is based on Ferndale native Josh Malerman’s novel of the same name. It follows a woman named Malorie (Bullock) and two children, dubbed Boy (Julian Edwards) and Girl (Vivien Lyra Blair), on the run from mysterious forces that are wiping out all of civilization.

It sounds simple enough, but there’s a twist — seeing these supernatural entities will compel you to commit suicide, so our protagonists are forced to wear blindfolds. Essentially, Malorie and the children must make it through a river and a forest without looking or suffer the consequences.

If it seems familiar, that’s because a “A Quiet Place” already did the same thing, swapping sight for sound, and did it better.

But in spite of their inevitable thematic comparisons, the two films are different enough for “Bird Box” to avoid feeling like a copycat of the former. Yet there are instances — and characters, which I’ll get to in a moment — that feel too familiar for the film’s own good. One scene takes place in a vacant grocery store, and the whole time, I couldn’t help but get “Zombieland” vibes (minus the Twinkies).

Scattered throughout the film are a plethora of flashbacks to Malorie’s life before, during and after the film’s antagonistic forces invade the U.S., all leading up to her blindfolded journey in present day. Entertaining as they are, there are a few too many flashbacks and not enough present-day sequences, hindering the viewing experience and shifting viewers’ focus to a group of characters that are mostly irrelevant to the film’s conclusion.

Many of the individuals within the flashbacks are one-dimensional stock characters that could’ve been plucked from literally any post-apocalyptic narrative — and for whatever reason, this one includes Machine Gun Kelly. But Malorie, soft-hearted war vet Tom (Trevante Rhodes) and reserved narcissist Douglas (John Malkovich) are all thoroughly compelling, largely thanks to top-notch performances from the actors that portray them. They make even the most generic of these sequences worth watching.

That’s not to say “Bird Box” is bad by any means. I actually quite enjoyed it, particularly Bullock’s performance — though it shouldn’t come as a surprise to anyone that she kills it, as usual. But for all the potential “Bird Box” has, it often falters when it has the opportunity to be great.

It’s a whole lot of fun to watch, and from an audience perspective, it’s a huge hit. From a critical perspective, “Bird Box” might not be as hard-hitting as it needed to be to have a real impact. Its final moments feel particularly underwhelming and carry far less emotional weight than they should.

But the film has clearly done something right. Being released a mere eight months after “A Quiet Place,” there was a strong possibility “Bird Box” may have never stood a chance. But its cultural impact is a rarity for films not produced by Disney nowadays. It’s even more refreshing to see a female-fronted film resonate with audiences the way “Bird Box” does.

Full of suspense and solid performances, “Bird Box” is a film I’d not only rewatch, but even recommend. It’s no “A Quiet Place,” but it’s got all the qualities of a blockbuster hit, plus the added benefit of watching it from your couch.