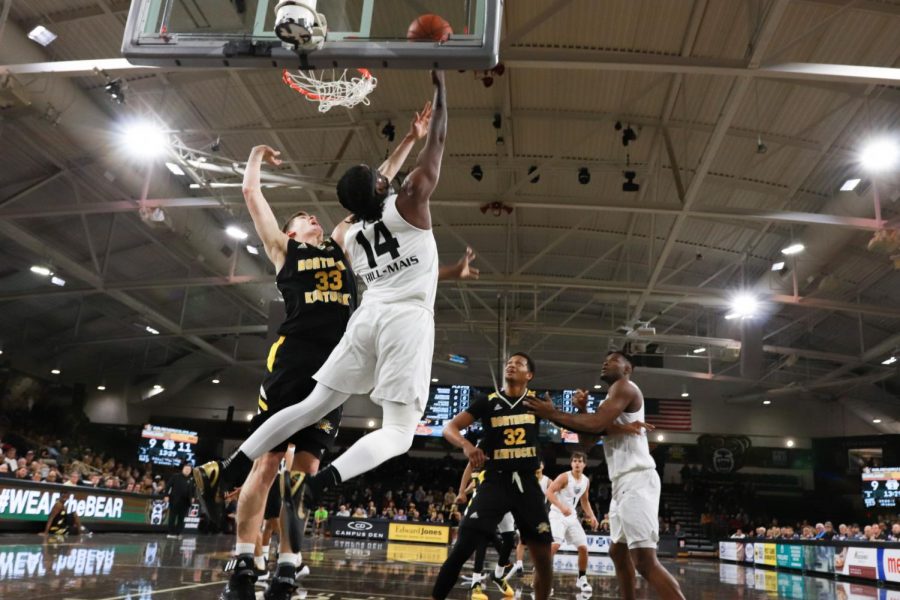 Xavier Hill-Mais scored a career high of 32 points in game.

Kicking off 2019 with a bang, the men’s basketball team took down the No. 1 team in the Horizon League, Northern Kentucky (NKU), winning 76-74.

On the first day back for students, the Grizz Gang was riled up and packed full when the 12-3 Norse came into town, with both teams looking to improve to 3-0 in conference play.

A rather high scoring affair did not start that way, as both teams struggled to score for the first three minutes. Northern Kentucky’s strong press defense proved troublesome for the Golden Grizzlies, and both teams only scored two points each after three minutes had passed.

In the middle of the first half, both teams began hitting every three they took. NKU guard Tyler Sharpe was electric, hitting all four 3-pointers in his first-half. Three pointers were traded back and forth, but eventually NKU was able to pull away, and they secured a 10-point halftime lead.

After the second half began it looked like more of the same, until with 12 minutes left Braden Norris drew a charging foul, and the momentum shifted.

Xavier Hill-Mais had 15 points in the first half, but in the second half is when he began taking over the game. Matched up against Drew McDonald, who was named the Horizon League player of the year in the preseason, he took advantage of the defense and ended up scoring a career-high 32 points.

“Once I saw McDonald was on me, I was surprised,” Hill-Mais said. “I didn’t think they’d put a player of his caliber on me because of fouls. When I saw that I decided to go at him to try to get him in foul trouble.”

The last 10 minutes of the game were back and forth, with both teams trading baskets and making hustle plays. Jaevin Cumberland deflected a ball right to Karmari Newman, who drained a go-ahead three to take a four-point lead with a minute to go.

NKU forward Dantez Walton had a three-point shot fall short, and Newman was able to grab the rebound, make a free throw and intentionally miss the second to clinch the victory. The O’Rena exploded as the full court heave from NKU fell short.

“A win like this can show our fans, the viewers and the people watching on TV that Oakland can play,” Hill-Mais said. “Pre-season a lot of guys questioned Oakland Basketball. This shows we’re still one of the best Oakland teams, which is what we’re trying to prove to everybody.”

This win put Oakland at the top of the Horizon League, tied with Detroit Mercy at 3-0 in league play. Starting off strong with wins over top-ranked opponents is important for Head Coach Greg Kampe, because it can mean a lot for Horizon League tournament seeding.

“The way it is set up this year, we need that home court, so we have to finish in the top four,” Kampe said. “The way I felt coming into this game, if we could win one of our first two games at home, we can put ourselves in position to get home court. If we win both, we could be in a position to win a championship.”

The Golden Grizzlies host Wright State in their next game on Saturday, Jan. 5 at 3 p.m..