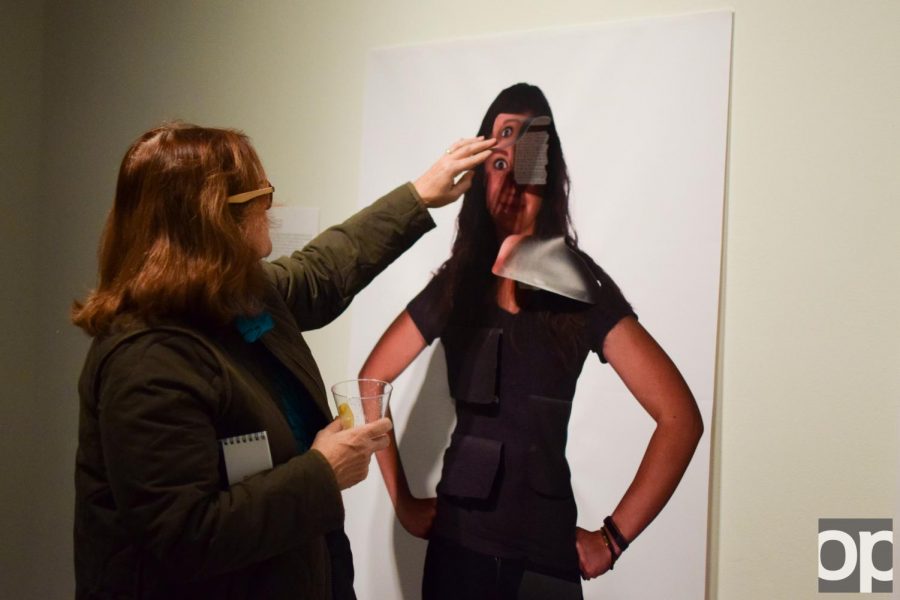 The art gallery at Oakland University is bustling with excitement and energy as seniors prepare to install and feature their work for the upcoming exhibition.

The Senior Thesis Exhibition runs from Nov. 30 to Dec. 9 at the OU Art Gallery in Wilson Hall.

“Senior Thesis students know that the goal is to get their work selected for an exhibition at the end of the semester,” Dick Goody, director of OU Art Gallery and department chair of art and art history explained via email. “About a month ago, faculty juried the best work into the show. The selected students then discussed with their professors the best way to engineer their work so that it could be installed to meet museum standards and practices for exhibition. Regardless of whether they are in the show or not, all the students’ work appears in the Senior Thesis catalogue, which is a substantial 60 page book.”

According to Goody, the jurying process mirrors how it is in the real world of art criticism, so it’s been a proper way to measure success.

Gabriella Randazzo, a graphic design major, was inspired by her visit to Sicily over the summer and the cafes she went to while there. She created labels for wine bottles and coffee cups, as well as a wallpaper.

Mason Cavanaugh, also a graphic design major, said that his thesis project is focusing on graphic design as a tool for promoting and branding clothing companies.

“I guess I’m driven by the influence of fashion and style…and the crossover between art, design and fashion,” Cavanaugh said.

His portion of the exhibit featured a large advertisement and look books.

Jacqueline Stoner’s photography project featured close-ups of different body parts with color filters. The combination made the photos look almost like landscapes. Stoner said she was inspired by Edward Weston.

“I also did close ups because you can see like the cracks in the skin and the hairs sticking up. It makes it so you don’t know it’s a human body or figure,” Stoner said. “So, I want people to question and use their imagination.”

Paige Roberts’ thesis was about sexual assault survivors, including herself. For her project, she took head-on, full body photos of her subjects on a white background. She then had each survivor write their stories in their own handwriting, and placed various flaps on the photographs that blended into the photo. In order to view the stories, viewers can lift the flaps.

“Their stories that are normally hidden are being revealed,” Roberts said.

Roberts put out the call for volunteers during the Kavanaugh trial, and had a big response, but many people felt there was no point in participating after he was confirmed, conveying the effect social issues have on art.

“I considered not doing it…but I think that everything that was going on made it more important to do right now,” Roberts said.

Goody explained that seeing the inception of an idea go from an “…initial hunch or decisive moment to something that can be enacted into a fully-realized artwork” is extremely worthwhile. “It’s always the spark of an independent idea that I find so exciting. To foster that ‘YES!’ moment is something special.”