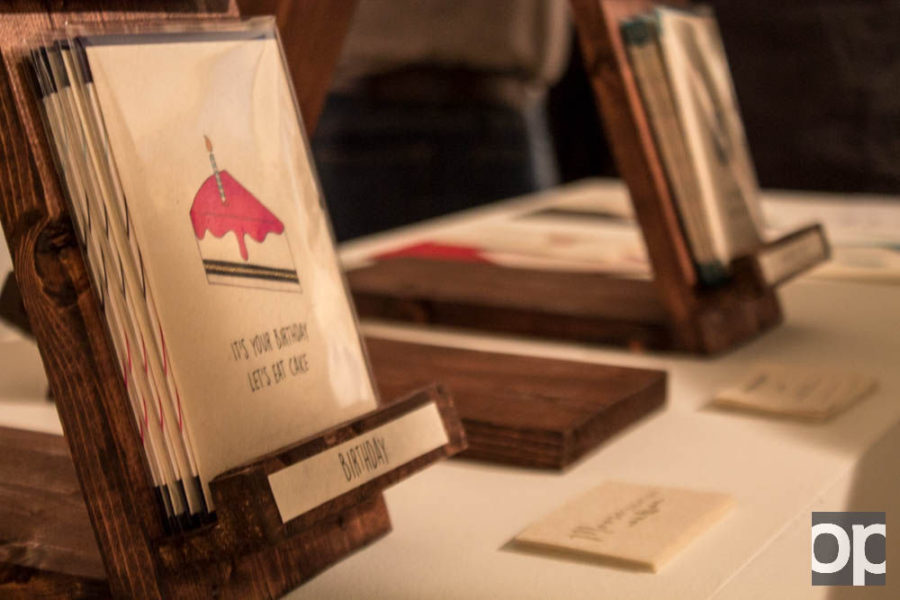 Using archival digital prints, Heather Champion created stationary that are "visual statements that help to capture all of life's moments."

After spending an entire semester on creating their projects, studio art and graphic design, seniors had their thesis work installed in the Oakland University Art Gallery.

The MMXV Senior Thesis Exhibition held its opening reception on Friday, April 17. The showcase features artwork created with a variety of mediums, including painting, drawing, mixed media and photography.

Katie Cagle, photography major, was one of the students with her work on display. Her set of six still life photographs was titled “Compartments That We Keep.”

As part of her project, Cagle reached out to find people who would be willing to talk to her about topics they keep hidden.  She then used everyday objects to create compositions that represented the topics in those conversations.

“This body of work is my visual interpretation of their stories,” Cagle said. “I was really concentrating on clean shots for minimal editing.”

Cagle’s photographs are all shot from a bird’s-eye view, looking down at the subjects. Some objects in her photographs include a set of cracked eggs, a bottle of Tums and dentist tools.

Cagle ended up with 16 interviews that ranged from face-to-face chats to e-mail to Facebook messenger. She offered anonymity and no judgement towards her participants. The topics of her interviews are very personal, and when asked if she could explain in depth the meaning behind the pictures, she said she couldn’t retell their story.

“The titles are there to assist the viewer in guiding them to a place of understanding,” she said. “It’s hard, because a lot of people want to know.”

Although Cagle had completed photographs for 15 of the 16 subjects, she said that the project wouldn’t be complete until she had around 25 subjects complete. She is still looking for subjects who are willing to participate.

Another student who had her art put in display was Sarah Blanchette, a journalism and photography double major. She created a quilt piece titled “Pornification Quilt.”

The quilt is made up of original and found images in a photo montage with a traditional quilt square border showcasing donated lingerie.

Blanchette described her piece as “a beacon for some heterosexual monogamous women who experience self-inflicted pressures caused by mainstream pornography. “Pornification Quilt”explores the degradation of mental, physical, and sexual health.”

It took Blanchette three months to construct the quilt. She explained the process from start to finish.

“The first step was to decide which visual elements were most appropriate for the topic,” Blanchette said. “Choosing a single composition created out of a photo montage bordered by quilt squares allows the viewer to view the piece as a photograph.”

Once she had completed choosing which images she was going to include in the quilt, the next step was to begin sewing.

“I sectioned out the quilt border in order to figure out how many 9 inch by 9 inch squares would be needed,” Blanchette said. “After creating each square, I connected them in their border configuration and finished the base with black fabric. After sewing the front and back together, with cotton filling in the middle, I then applied binding around the edges and applied the cut out fabric prints of my images.”

Like Cagle, Blanchette relied on outside help with her piece. She had 10 people contribute by donating lingerie, modeling or helping with the construction of the quilt. Most of the quilt making was done on the weekends.

“It was important to have additional hands in order to enforce the community aspect seen throughout the history of quilting,” Blanchette explained.

Both Cagle and Blachette’s work rely on participation and help during both the creation process and also once the pieces are complete. To see their work, as well as the other seniors thesis projects, visit the Oakland University Art Gallery. The exhibit will be on display April 17 through May 17, 2015.