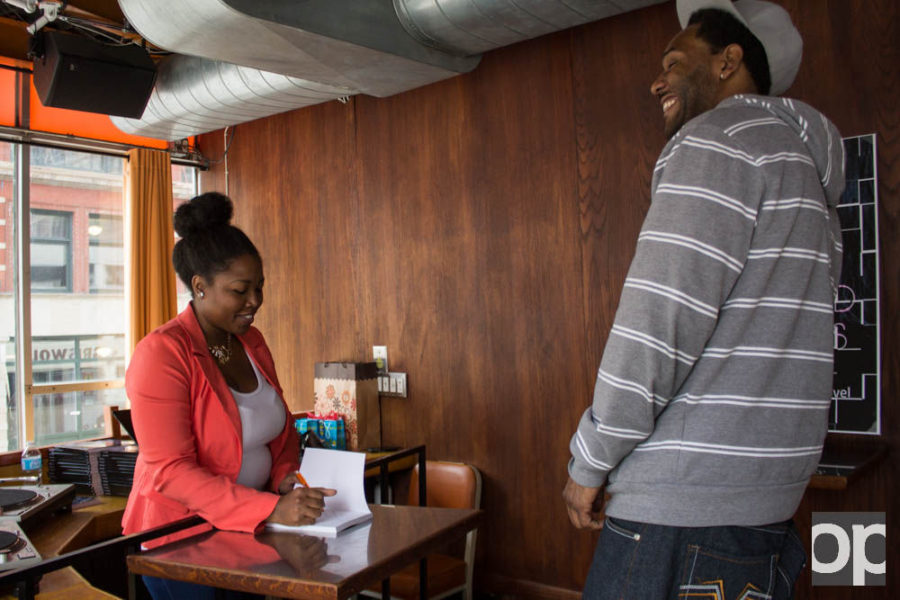 Making connections with authors, publishers and agents is one of the most important tasks a young author with dreams of having her work published can do. Ever since transferring to Oakland University for a bachelor’s in Creative Writing, that’s exactly what I’ve been trying to do.

The English department does a fantastic job with planning poetry and fiction readings, Q/A sessions with publishers and authors, and creating a large community of creative writers who want to learn the business. I’ve met many authors, made plenty of friends and gathered connections for my future because of it.

However, my last run in with a debut author came from an assignment for The Oakland Post. An Oakland University alumna had recently self-published her first novel and was celebrating with a book signing and reading in Detroit. When I heard the news, I was excited to go and take photos for the Post.

I met Art Pacious, who goes by pen nameArtB., at Urban Bean Co. in downtown Detroit on Saturday, April 11. The bright orange café sitting on the corner of Grand River and Griswold wasn’t hard to find, unlike the parking which eventually ended with me getting a parking ticket. Set up on the top level of the tiny café were chairs for guests to attend her book reading. Piles of her book, Shattered Marbles were stationed behind her, and a large poster of the cover of her novel was on display.

After introducing myself, I snapped my photos for the Post and then got to talk to her one on one, author to author. She is one of the nicest people I’ve ever met. She’s passionate about her craft, and she was excited to talk to me about her novel and about her writing process.

Much like other authors, her passion for writing came at an early age.

“I’ve always loved writing, ever since I was a kid. I began taking it seriously when I was on the newspaper staff at my high school,” she explained.

When I asked her which she preferred, journalism or creative writing, she told me that she couldn’t choose one over the other.

We discussed topics such as character and setting. She told me in depth her reason for placing her novel in Detroit.

“Detroit is my home,” she said. “No matter where I go, there’s no place like home. I wanted to have the story of my first novel there. It just seemed right.”

Soon enough, the café filled with friends and family who came to support her. They bought copies of her book, which she signed with a beaming smile. “Thank you for supporting me!” she wrote in each copy. After taking photos with her supporters, myself included, she read some excerpts from her debut novel and had a Q/A session.

One of the first questions asked was how she came up with the story, and if any of it was based on reality.

“The very beginning of the book was inspired by an actual event,” she said with a laugh. “I had no idea where I wanted to go with that particular story, but I knew I wanted to share it because it was so bizarre. Eventually, I began developing the rest of the book from my imagination.”

She explained that the rest of the book is completely fictional, but her characters are often influenced by people in real life and the main character is very much like her.

“I actually have three reasons why I came up with the title. ‘Marbles’ is such a great word to play on,” she started. “First, it’s something that can’t be easily broken. You can throw it or bounce it off a hard surface, but it won’t break. If you want to shatter it, you must heat it up and place it in cold water or by using a hammer. In the book, the main character is like that hard shell that’s not easily broken, but so many things try to break her.

“Secondly, marbles are used as a game, such as Chinese Checkers. In the book, she believes that her ex-boyfriend is stalking her and leaving marbles. She thinks he’s playing a mind game.

“Last but not least, the phrase ‘lost your marbles’ means someone is crazy. The main character is having a mental breakdown and possibly going crazy.”

ArtB. discussed the process of writing, stating that it took her five years to complete the entire book. One guest asked how she battled writers block.

“After I realized that staring at the blinking cursor in Microsoft Word wasn’t working, I would simply walk away. I would run errands, go hiking, watch movies, or take a nap. Basically, I would do whatever I could to get away from the problem,” she explained. “Also, caffeine was, and is, my best friend during the writing process.”

She also described how story ideas would hit her at random times, usually when she was starting to fall asleep.

“Writing is such a roller coaster ride. It has its ups and downs. However, the best part is when you finally get that great idea that completes your thought and you rush to the computer to type it in.”

ArtB. even hinted about a sequel.

“Nothing is etched in stone yet, but I will say that the sequel will go deeper and more in depth than the first.”

She ended the Q/A session with advice to young writers.

“Perfectionism is something you should stay away from. Just write! You can go back and revise and edit later. If you have a great idea, go with it no matter what. Challenge yourself to make it work. Tweak it until it’s exactly what you want. It takes patience to write a great story,” she suggested. “Put no restrictions on your creativity.”

Read my review of Shattered Marbles.