Looking Back: No skiing, sledding or tobogganing 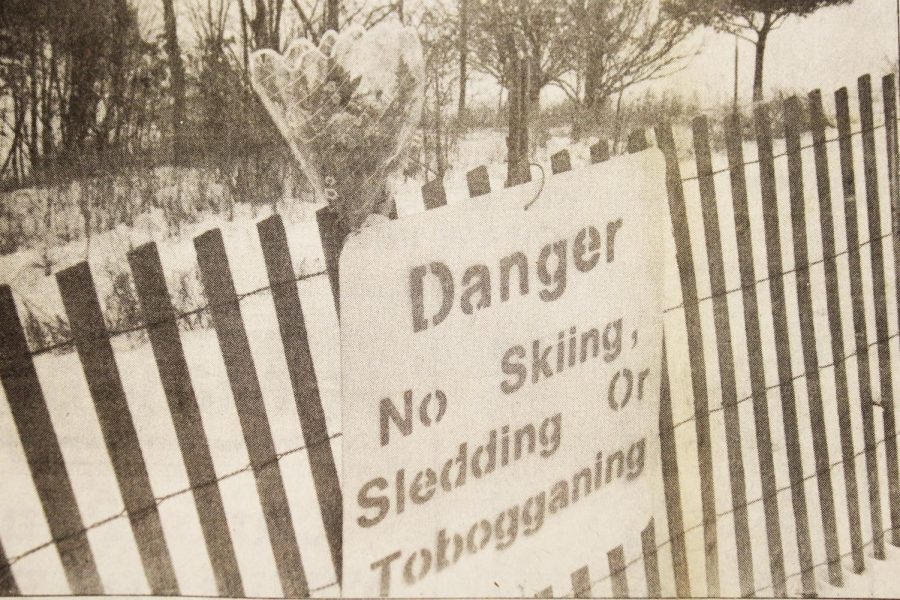 With the sudden snowstorm that we had last week, it seems that Oakland University is soon going to be absolutely covered in the cold, white fluff for the next few months.

While it can be fun to build snowmen and throw snowballs at each other, there are a few signs posted in certain areas around campus that prohibit one of the most fun wintertime activities.

Signs saying “No skiing, sledding, or tobogganing” are posted around several hills on campus, taking away student’s ability to take advantage of some of the best sledding hills imaginable.

Why is it that Oakland doesn’t allow sledding in some areas, most notably the massive hill leading down to the baseball fields near the Rec Center?

The reasoning behind this decision is to keep students safe, and to prevent a repeat of what happened on New Year’s Eve, 1989.

Matthew Leseman, a nine-year-old Rochester Hills resident, died of injuries he sustained while sledding down the hill behind the Lepley Sports Center on December 31, 1989.

Leseman was sledding with a friend of his, Timothy Landholt, when the sled they were using crashed into a tree on the hill. Landholt survived and had only minor injuries following the crash.

Leseman’s father was nearby in a parked car while the two friends were sledding, but did not witness the accident himself.

After the crash, Leseman was transported to Pontiac Osteropathic Hospital, which is where he ultimately passed away.

A communication professor at the time, Chuck Yoakum, happened to come upon the site of the accident shortly after it occurred.

“I was told by one of the E.M.S. people and a policeman that the boys had been sledding on a narrow track down the hill and supposedly lost control of the sled, hitting a tree head on,” Yoakum said regarding the accident. “They must have been traveling at a pretty rapid pace when it occurred.”

Sledding in the area by the hill was not a new concept at the time. Before the accidents people used the hill to sled, and there were even accidents on the same hill before.

“This is the first death we’ve ever had,” the then Public Safety Chief Richard Leonard said. “Two or three years ago we had an accident on the other side of Lepley’s hill. The sled hit the fence by the baseball field, and the man on it broke his leg.”

After the accident, additional warning signs were posted around the hill, and more snow fences were installed to block off the hill from hopeful sledders and tobogganers.

Several OU students, some of whom had also sledded through the wooded hills by the Lepley Center, were shocked by the event.

“It’s too bad it had to happen,” said Jane Dalbec, a then 19 year old Oakland student. “When I went sledding there I definitely thought it was scary. The hill is very bumpy in places, so it’s not hard to see how an accident like that could have happened.”