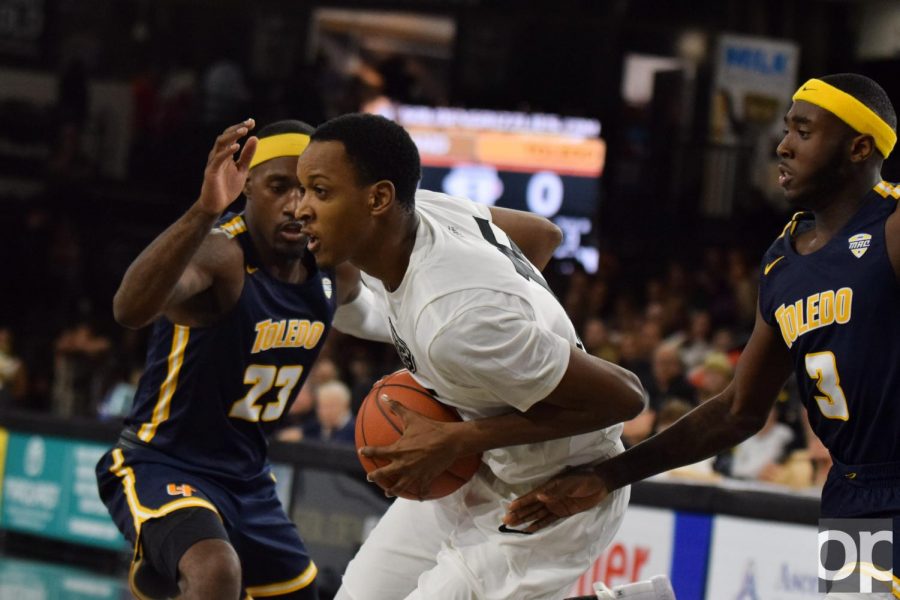 Opening night for Oakland men’s basketball brought the first snow of the season and an Oakland loss against the Toledo Rockets 87-86.

The crowd did not disappoint, though, with a nearly full attendance of 3,841, the most at a home opener since Oakland joined the Horizon League. Oakland’s record in their home openers as a Division I team now falls to 13-6.

The first half kicked off with a bang for the boys in black and gold. Oakland got out to a 21-7 lead on the backs of Xavier Hill-Mais and Jaevin Cumberland. Hill-Mais went off for 15 points and five rebounds in the first half.

Cumberland, a redshirt junior, had a great first half as well going 50 percent from deep with three 3-pointers. Hill-Mais was very optimistic about the loss, speaking on the effort of this young Golden Grizzly team.

“It was great being on the court again in the regular season, I think we showed a lot of people how we play Oakland basketball,” Hill-Mais said. “I’m proud of how the team played defensively in the first half. We’re a young team with a lot of new players so I think some guys stepped up a lot and that’s just great to see. Only thing is we have to do better going forward.”

In the second half, Oakland came out of the gates just like the first, firing. James Beck, who exited the game with a knee injury, returned in the second half. The crowd was electric as Brailen Neely drained a three to put the Golden Grizzlies up 50-43.

Oakland went down for the first time with about eight minutes to go after two Toledo free throws. Shortly following that there was a flagrant foul on Beck for hooking and holding, a new NCAA rule which gave Toledo two free throws and the ball. Both teams were in the double bonus with under five minutes of the half, which lead to a lot of free throw attempts on both sides of the ball.

With the game going down the wire, Toledo’s offense started to kick into high gear hitting two back-to-back threes bringing the score to 59-56. Free throws were crucial in this game and Toledo practically lived at the charity stripe, going 21-25 as a team.

Hill-Mais continued with his massive game finishing with a career-high 30 points. Karmari Newman hit a clutch three with 11 seconds left in the game to put Oakland down one, and to keep the Golden Grizzlies in the game.

Spencer Littleson of the Rockets, who had just checked in, split his free throws with nine seconds left. With the game on the line, Neely made the first free throw and missed the second. As the second shot bounced off the rim with four seconds left, Hill-Mais caught the rebound and attempted a layup which rolled off the rim, and the game ended 87-86.

Head Coach Greg Kampe was happy with the team’s effort and leadership.

“Any time you hang in there, any time it goes wrong like it did for us and you’re able to stay there and have a chance at the end, there’s a couple reasons: execution and leadership,” Kampe said.  “We didn’t quit. The crowd helped us, things like how vocal they were really help. So, I gotta say the leadership gets an A tonight.”

The Golden Grizzlies will be back on the Blacktop on Tuesday, Nov. 13 for Veteran Appreciation night, to host the Western Michigan University Broncos at 7 p.m.