Looking Back: Arson in the 70s 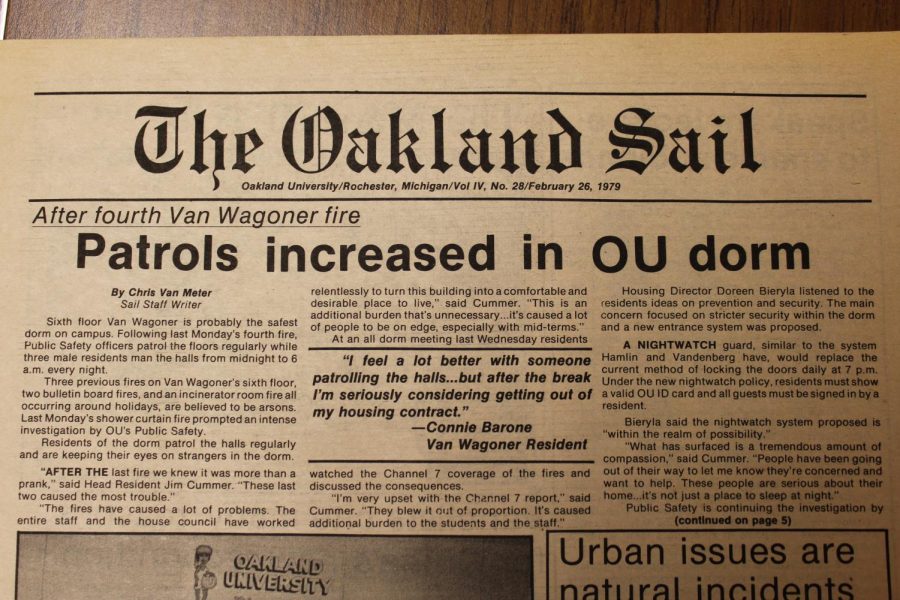 There were 175 residents evacuated from Van Wagoner House on Feb. 20, 1979 for the second time in a week after a shower curtain was set on fire on the building’s sixth floor.

This was the second fire forcing students to evacuate the building that week, and the fourth in the past year. With all of these fires being set in the dorms, the possibility of an arsonist on campus began to be discussed.

“Whoever it is set the curtain on fire,” said the Housing Director at the time Doreen Bieryla. “This is not in the area of a prank.”

Patrols began to walk through the floors following the fourth fire in Van Wagoner. Public Safety officers walked around the building regularly, while three residents kept an eye out between midnight and 6 a.m.

“The fires have caused a lot of problems,” said Jim Cummer, a Head Resident in Van Wagoner house. “This is an additional burden that’s unnecessary… it’s caused a lot of people to be on edge, especially with midterms.”

At an all dorm meeting following the fires, several suggestions were given from students. These suggestions included a smoke detector system in the hall, as well as a new entrance system into the residence hall being proposed to tighten up security in the building.

Van Wagoner would have a Nightwatch guard system implemented, similar to the systems that Hamlin and Vandenberg currently have in place. The previous system replaced the current method of just locking the doors to the building at 7 p.m.

Bieryla said that the Nightwatch system that was being proposed was “within the realm of possibility.” For anyone that has been in Van Wagoner house after 8 p.m. recently, this system did eventually make it to the building.

“What has surfaced [from the fires] is a tremendous amount of compassion,” Bieryla said. “People have been going out of their way to let me know they’re concerned and want to help. These people are serious about their home…it’s not just a place to sleep at night.”

Despite these suggestions and safety precautions, some residents still felt uneasy following the fires. One of those was Connie Barone, a resident on the sixth floor of Van Wagoner.

“If you live on another floor it would be another thing because you don’t see the smoke,” Barone said. “I feel a lot better with someone patrolling the halls…but after the break I’m seriously considering getting out of my housing contract.”

The rash of fires that broke out in Van Wagoner may have sparked a copycat in East Vandenberg as well. A fire was set in the elevator soon after the fourth fire in Van Wagoner, however no students were evacuated and there was no damages or injuries reported following the incident.

Although Public Safety officials were hesitant to classify this event as arson, Investigator Mel Gilroy suggested that “it’s pretty difficult for a bag of chicken to start on fire by itself.”

There was no connection found between the fire set in Vandenberg with the fires set in Van Wagoner.