Volleyball comes out victorious against No. 1 Green Bay 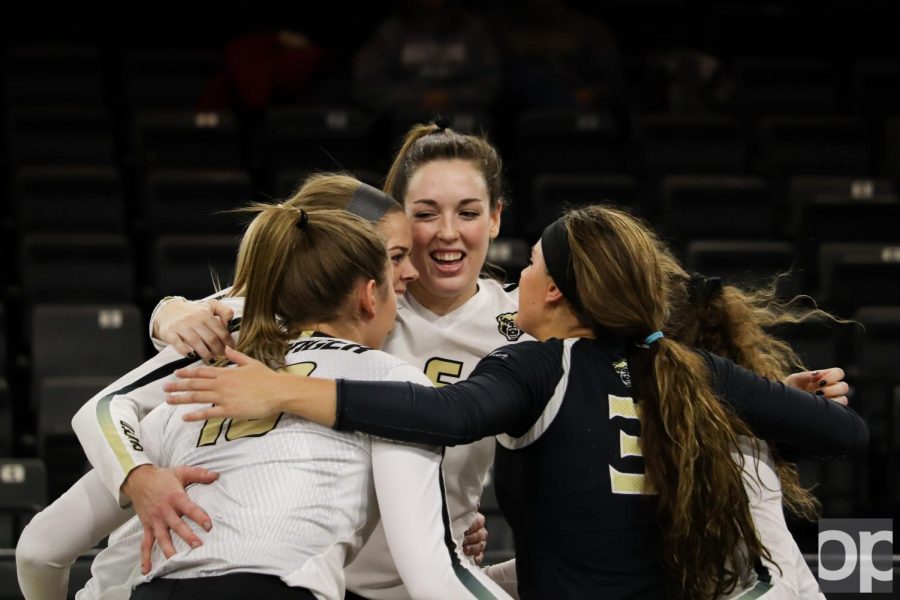 In the O’Rena on a cold Friday night, the Golden Grizzlies hosted the No. 1 team in the Horizon League, the University of Wisconsin-Green Bay Phoenix, in a back and forth match. In the end, the Grizzlies triumphed, winning 3-2.

It was senior night for Oakland.This would be the last game played on the blacktop for the seniors on the team. Krysteena Davis, one of four seniors, had an amazing game, leading the team with 15 kills and five blocks.

“It was obviously a great game, so I’m excited about that,” Davis said. “But it’s sad that my last time on the blacktop is done”.

The Golden Grizzlies had a very rough start in the first and second sets, yet they came out victorious going up 2-0 over the Phoenix. In the first set, Oakland was down until they tied the set 15-15, then finally had their first lead of the game at 22-21 which catapulted them to win the first set. The second set was neck and neck with a 6-6 start. The Phoenix then rallied later in the set with a 4-0 run to make the set 22-21. The Golden Grizzlies shut down their efforts however and closed out the second set on a 4-0 run of their own.

The third and fourth sets were all Green Bay as they convincingly won both sets 25-15 and 25-17. Jordan Lentz, a redshirt junior was lighting up the stat sheet throughout with her 11 kills and four blocks. She, along with the other seniors, Aleksandra Malek and Jordan Massab, helped her team keep focus and confidence through those third and fourth sets.

The fifth and final set was for all the marbles, and the senior night crowd was roaring. The set started very close, and it seemed that Green Bay might match the intensity, however with the team’s emotion, effort and the hype of the home crowd, Oakland went on a run and put the game away. The Golden Grizzlies took the final set 15-8, the team stormed the court and embraced after a hard-fought victory.

Davis and Lentz were outstanding with a combined total of 26 kills and nine blocks. Head Coach Rob Beam had nothing but positive things to say about his team.

“The O’Rena is such a great place to play volleyball and I think our seniors have done an outstanding job being leaders,” Beam said. “We have an extremely young team. We’ve had a lot of adversity so a lot has been laid at the feet of the seniors to learn how to lead, to build relationships, gain rapport and at the same time, share what our program is about to people who are still learning it.”

The women’s volleyball team will be visiting Northern Kentucky University for their next game on Friday, Nov. 9 at 6 p.m.