Students have a sweet time and celebrate Hynd 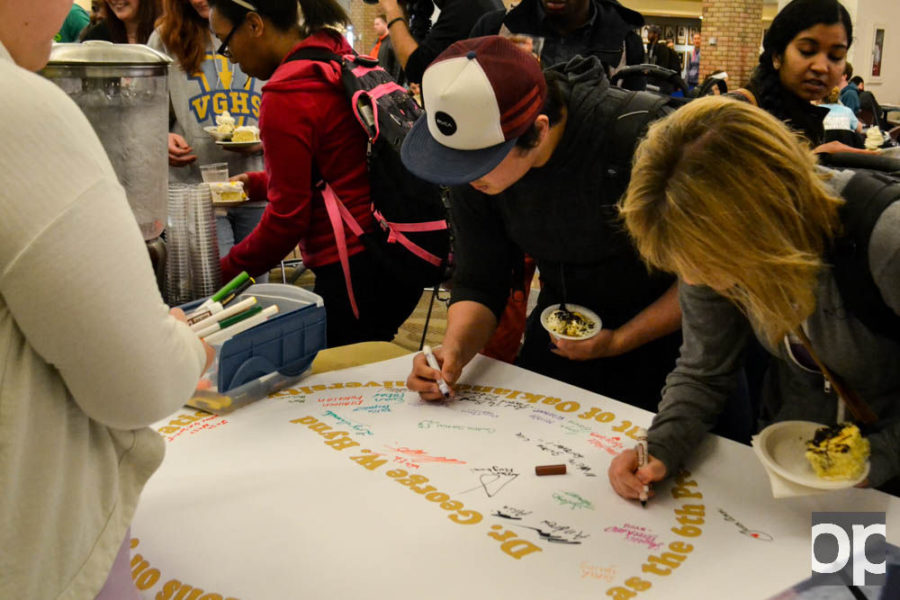 The past year has seen development in much of OU’s vision and branding. As part of this process, the campus community saw the hire of the university’s sixth president, Dr. George W. Hynd.

Yesterday, in the Pioneer Food Court, students and faculty alike gathered to celebrate Hynd’s first year at OU from noon to 1 p.m.

A cake and ice cream buffet was available, and those in attendance also signed a poster bearing a picture of Hynd’s high school band — named The Six Pack — to welcome the president.

Hynd himself walked around speaking to students and staff alike and also delivered a brief speech in the food court.

“We have outstanding campus life, and this is a wonderful place to be,” Hynd said.

Hynd also voiced his excitement for the year to come as well. He described a vision of what changes will occur on campus, including a new residence hall, and a redone Oakland Center.

Additionally, Hynd also joined in by serving students cake and ice cream from the buffet that was set up in the food court.

Student Lana Mathis, who attended the celebration, said, “I think the ceremony was a simple but meaningful way to bring the students to President Hynd and vice versa. It was his way of showing the students that we can go to him and talk to him about anything that goes on at Oakland University.”

Hynd will be formally inaugurated next Wednesday, April 29 in the O’Rena. Doors open at 2 p.m. and the ceremony begins at 3 p.m.