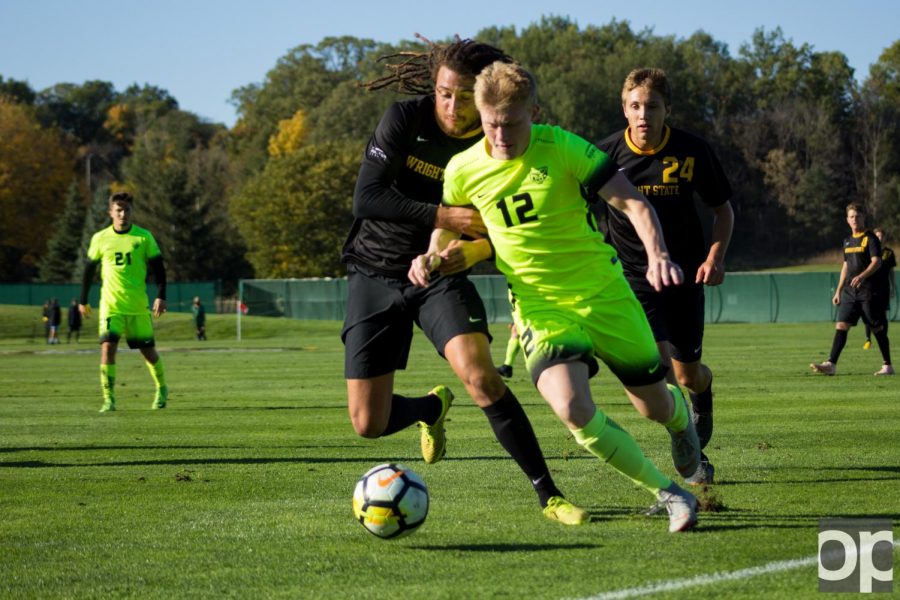 A closely contested game in the first half got away from Oakland in the second as they ended up losing 2-0 to the Wright State University (WSU) Raiders.

There wasn’t a cloud in sight at the 3 p.m. kickoff as Wright State started on the attack. Come the third minute, Oakland sent two crosses into the box, both failing to connect. Wright State was able to get the first two shots off in the game both coming in the fourth minute, one of which was wide but the other required a save by OU’s keeper Sullivan Lauderdale.

Throughout the first half, Oakland actually put an immense amount of pressure on the Raiders, but they were never able to capitalize. Oakland finished with nine shots in the first half to Wright State’s seven.

One of Oakland’s best looks came in the 18th minute when they made a quick break after a Wright State turnover. Midfielder Evan Sawula’s shot was high.

During the 23rd minute, Wright State defender Dan Bent got the ball swiped, in doing so he performed the biggest flop of the game that was rightfully ignored by the officials but the crowd bickered at the dramatics of the player. This mishap by Bent lead to a good look by Oakland forward Nebojsa Popovic that was blocked.

As the half came to the end, Oakland raced against the clock to get one last corner kick in. They beat the clock by only a few seconds but the corner was just high, as no one was able to get a head on it.

The second half was dominated by the Raiders. They outshot the Grizzlies 9-5 and ended up putting in their winning and insurance goals in this half.

The 53rd minute is when Oakland caved. Wright State midfielder David Rokvic lasered a shot off the crossbar that deflected right back to forward Alec Philippe. With Oakland’s keeper Lauderdale committing to the crossbar shot he was unable to get back in position in time which allowed Philippe to stuff in the back of the net.

Oakland’s best opportunity came in the 68th minute when the Wright keeper was forced to step up and attack forward Popovic. Popovic was able to get the shot by the keeper but it was wide by about a foot to the right. This shot seemed to suck out the hope that was left in the Grizzlies.

Come the 78th minute Wright State put Oakland away. Wright State made a quick counter strike after an Oakland turnover. Defender Luke Morrell was forced to commit a yellow card foul on Wright States’ midfielder Jackson Dietrich, unfortunately, the foul was committed within the penalty box and Dietrich was awarded a PK that he capitalized on. Jackson nailed it to the right side of the net as Lauderdale guessed wrong and committed to the left side of the net.

For the last 12 minutes or so Oakland fought in hopes of a miracle but they came up short failing to get any goals on the board.

After the game, GrizzVision was able to catch up with Head Coach Eric Pogue.

“They make you pay for your mistakes,” Pogue said. “I thought the first 30 minutes of the game we had them on the ropes but we weren’t lethal enough in the final third of the field to make them pay.”

Saturday, October 20th at 8 p.m. Oakland travels to Milwaukee for another tough conference matchup, hoping to not repeat this game’s results.