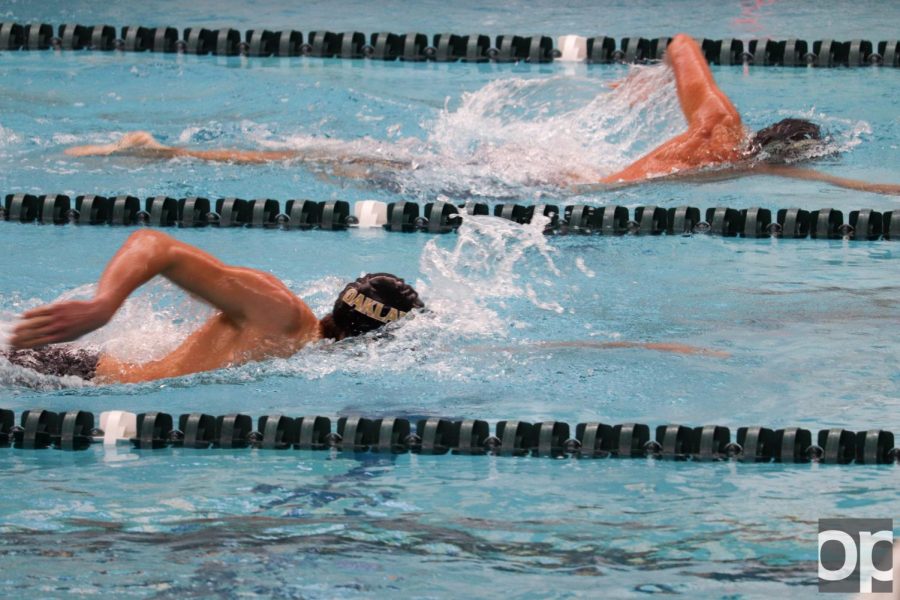 Oakland men’s and women’s swim and dive teams squared off against themselves in a friendly but competitive meeting. The women’s gold team won 71-42 and the men’s black team won 63-50.

Event one set the tempo of the meet with the 400-yard medley relay. On the women’s side of things, the gold team’s relay squad of Grace Shinske, Katlynn  Emaus, Mady Cislo and Amber Lefler took home first with a final time of 3:47.64 which was 1.16 seconds faster than second place.

As for the men’s race, the black team of William Gayne, Tony Eriksson, Mack Flowers and Rudy Aguilar-Fernandez won with a 10-second cushion at 3:22.47.

The following event was the 100-yard freestyle. The women’s freestyle was won by Krissy Harmon, who was representing the gold team. The runner-up was another gold team member. Maggie Held put a solid final time of 10:46.98 up. The men’s matchup saw Benjamin Davis grab a narrow victory over Danylo Hrebelnyi. The difference in their final time was a mere .56 seconds.

The 50-yard freestyle saw two intense races. The men’s gold team’s Paul Huch took home the win in the race with a final time of 20.31. The women’s race saw Karlee Marsh win with a time of 23.85.

Another notable event was the 200-yard butterfly. For the men’s race, Colton Phelps of the black team recorded a final time of 153.5. In the women’s race, Cislo of the gold team won by five seconds over fellow gold team member Elloise Clements.

The next race was the 100-yard freestyle. For the women, Katie Colwell of the black team won a tight match with a final time of 52.06. In second place was Marsh of the gold team. This was one of the few matches where the gold team didn’t place.  Just like the women in this race, the black team had the first place swimmer. Eriksson had a final time of 46.3 which only .86 seconds faster than runner-up Gabe Trevino.

The event got airborne with 3-meter diving. The winning score for the women was nice 134.4 points by  Sarah Stine of the gold team. As for the men, Joe Smith recorded a score of 160.9 to lock up a win for the black team.

GrizzVision was able to catch up with Head Coach Pete Hovland after the meet.

“I’m really pleased. This time of year we haven’t done a lot of racing in our preparation,” Hovland said. “We’ve been trying to get them back in shape with hard lifting, doing a lot of things that will make them tired. The black gold meet has traditionally been one of our fastest meets of the year and I was really pleased where we were top to bottom from our upperclassmen to our new comers.”

The last events of the long night were the women’s and men’s 400-yard freestyle relay. The relay team of Marsh, Cislo, Harmon, and Lefler put the cap on the dominant play of the gold team. The men’s race won by the gold team relay squad of Huch, Trevino, Micah Dejinge, and Christian Bart with a time of 3:08.93.