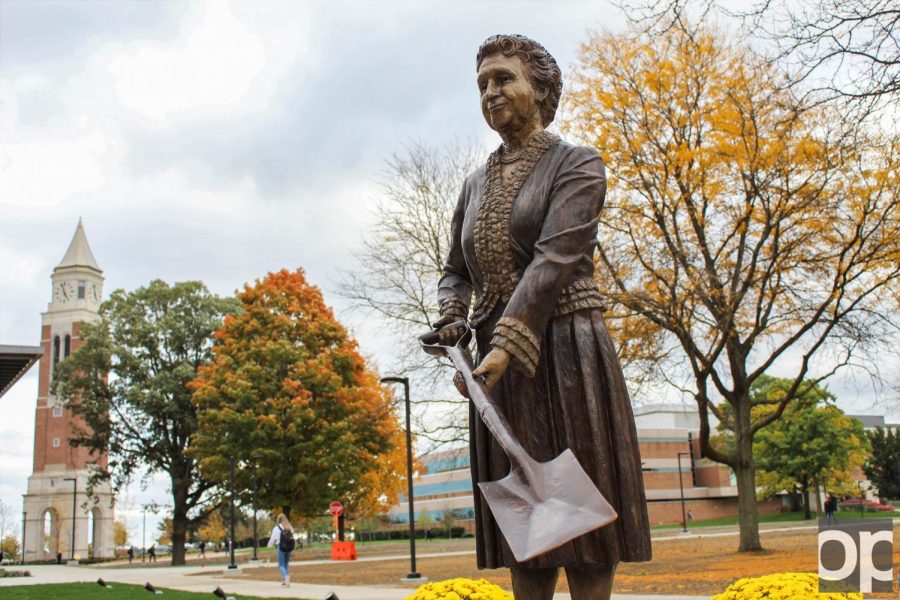 A life-size statue of Matilda Dodge Wilson was unveiled on Saturday, Oct. 6 between the Oakland Center and South Foundation Hall.

The statue, whose reveal coincided with Homecoming and Reunion Weekend, is in memory of Wilson, the co-founder of Oakland University and former Meadow Brook Hall resident. The idea for the statue came from the 2010 graduating class.

They intended to commission the statue as a parting gift to the university. OU is home to several statue installations that can be found all over campus.

“The students had this wonderful idea, but unfortunately, statues cost a lot to fund,” said Kelly Brault, director of Annual Giving at OU. “It was placed on the back burner for a while.”

The idea was picked up by alumni members from classes in the ‘60s at their 50 year reunion. Members of the reunion committee took charge of collecting donations for the statue.

“A lot of students from the ‘60s knew Matilda personally,” Brault said. “They spent time with her on campus, especially when she was living in Meadow Brook.”

As the alumni got closer to their monetary goal, the OU Alumni Association and the University Advancement Center began giving generously to the cause.

The statue serves as a tribute to the late Wilson, who passed away in 1967 at the age of 83. It’s a life-size statue made entirely out of bronze. Former students were consulted on the portrayal of Matilda.

“Accuracy was key from the way she was standing to her clothing and expression,” Brault said.

Wilson was born in Ontario, Canada. She attended school in Detroit and worked at the Dodge Motor Plant before marrying its founder. In 1947, she donated her estate to Michigan State University. The location would later transform into Oakland University and Meadow Brook Amphitheater.

“During my freshman year at OU I met Matilda at a Meadow Brook event,” Mary Schwark said. Schwark is an OU alumni and a member of the group that helped describe Matilda to the artist. “She was kind, hospitable, generous and grandmotherly in appearance. While diminutive in stature, we understood that she was anything but diminutive in accomplishments.”

Additionally, Wilson served as lieutenant governor in Michigan in 1940. In 2016, the state of Michigan declared Nov. 4 to be Matilda R. Dodge Wilson Day.

Lou Cella is the artist who brought the sculpture to fruition. Cella is a Chicago native and works as a graphic designer and sculptor. He specializes in the human form.

His other work includes commission pieces for baseball stadiums, museums and memorials. His pieces can be seen at Comerica Park in Detroit, the University of Notre Dame in South Bend, Ind. and Safeco Field in Seattle, Wash.

The Annual Giving Board at OU works with donations and philanthropy that will further the advancement of OU and its students and faculty.

“We are so excited about the portrayal of Matilda and everything that it will bring to the campus,” Brault said. “It’s an honor to have helped bring a physical reminder of her to the school.”

The statue can be found on the walkway between South Foundation Hall and the Oakland Center.

“I am so excited to see how students will interact with the statue,” Brault said. “Everyone involved was extremely passionate about the accuracy of it.”