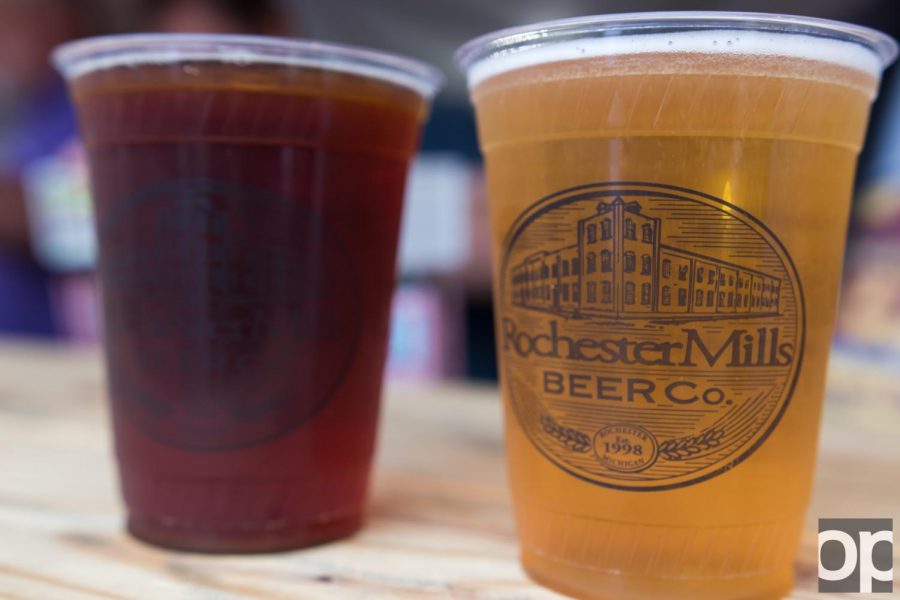 Rochester Mills Beer Company hosted their 20th annual Oktoberfest on Sept. 27-29. A portion of their proceeds went to the Make-A-Wish Foundation and the North Oakland Waves, a local competitive swim team.

Oktoberfest was located off of Water Street, in downtown Rochester. With tents to shield festival goers from the cool fall weather, there was a place for Oktoberfest goers to hang out, talk and dance without being too cold.

The festival also featured many activities for both children and adults. On the first night, there was the ceremonial tapping. There were also contests like bratwurst and sauerkraut eating competitions, as well as a stein lifting competition.

There were a few games of cornhole set up, bounce houses, goats to feed and ponies to ride. There were also clowns to entertain the children, as well as a band and traditional German folk dancers.

Besides the beer made at Rochester Mills Beer Company, there were classic Oktoberfest foods like bratwurst and pretzels.

Alyssa Ochss, an Oakland University student and contributor to The Oakland Post, has been a traditional German folk dancer since the sixth grade. She has performed at multiple Oktoberfests and stated that she enjoys the people at Oktoberfest. Her favorite song to dance to is “Drah Di Rum” by Klostertaler.

The band that performed at Oktoberfest is named Enzian, which is a German flower. In addition to playing more classic songs like “Edelweiss,” the band even did a cover of Billy Ray Cyrus’ “Achy Breaky Heart,” switching between German and English throughout the song, which made for a fun addition to their set.

John Czernel, who has been a part of the band for a couple years, explained that he loves “bringing joy to the masses” at events like these through the band’s music.

“It’s a joyous occasion,” Czernel said. “People come here with one thing in mind: to party and have fun.”

Lenny Puma, who has been with the band since the 1990s, agreed, saying the atmosphere is what makes the festival so fun.

“I like that [Oktoberfest is] a cool place for families to come, and that it brings the community together,” said Rene Perrott, who has worked for Rochester Mills Beer Co. for three and a half years.

True to his statement, there were many families, groups of friends and couples attending the event, making for a packed space.

Deanna Herbolisheimer, a resident of Rochester Hills, has been attending Oktoberfest with her family for 10 years. She said that the fun kids’ activities are her and her family’s favorite part of the festival.

Ray Bravo, who was in Rochester Hills from México on business, said that it was his first year going to Oktoberfest and that he enjoyed all the people and “the beer, of course.”

Overall, Oktoberfest can be a fun way to usher in the new month, and celebrate culture, food and community.