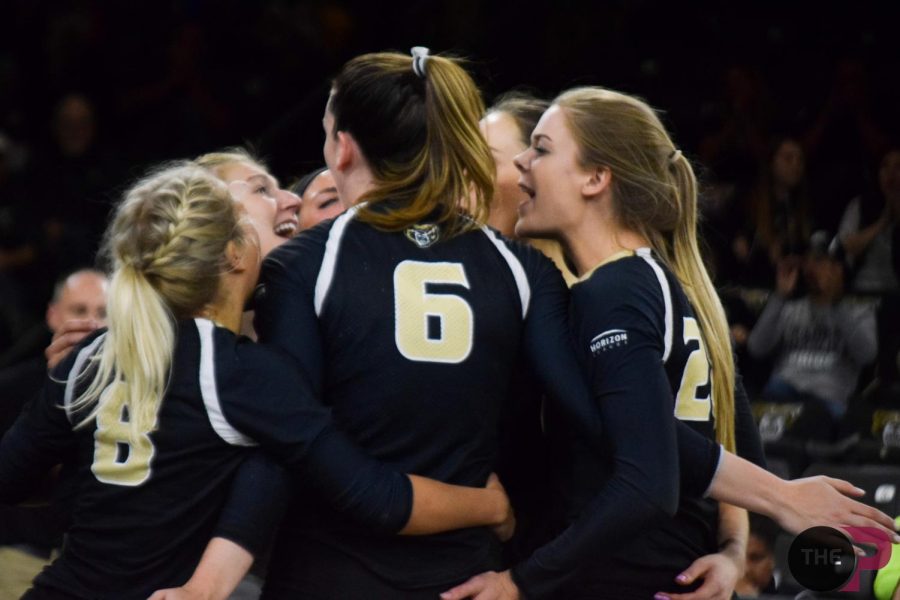 Women’s volleyball played their Horizon League conference opener against the Youngstown State University (YSU) Penguins on Saturday, Sept. 22. Although Youngstown put up a fight in each set, they were no match for OU’s sophomore middle hitter Jamie Walling’s 16 points, with 14 of those points being kills.

Going into this game with a 4-7 overall record, 1-7 in the last eight games, OU was looking for a strong statement win, and Walling believes that the win against Youngstown State helped the team make their case to show the league that this team isn’t a pushover.

“I do think today is a statement and we have another one to make every time we take the court,” Walling said. “Cleveland State will be our true challenge because they are the defending regional champs. If we beat them, I think teams around the league will take notice of us.”

While the Golden Grizzlies swept Penguins three wins to none in the game, it did not come easy. Oakland won each set coming from behind, including overcoming a five-point deficit in the third set. Senior middle hitter and team captain Krysteena Davis said that this is not team strategy even though it happens often.

“Starting down has never been a strategy going into a game,” Davis said. “Our team is resilient this year, and we’re good at getting ourselves out of situations where we’re down. We’re never out of the fight.”

“I definitely have had better games throughout my college career,” Davis said. “But this game was one of the better games I’ve had.”

“Every player contributed today,” Head Coach Rob Beam said. “The girls played unselfish volleyball and that resulted in a three set sweep against a conference opponent.”

“Statistically speaking it was probably my best game so far,” Walling said. “I definitely had room to improve my blocking tonight, but overall I guess I can say that this was my best game.”

With eleven underclassmen (six freshmen, five sophomores) and only three seniors, the volleyball team has a lot of youth and not a lot of experience. Being where they are right now, tied for the No. 2 spot in the Horizon League, this volleyball team has the chance to cause some problems for opposing teams in conference play this season.

The Golden Grizzlies next home game will be on Friday, Sept. 28 against Indiana University Purdue University-Indianapolis (IUPUI) at 6 p.m.